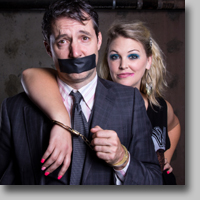 I had misgivings about going to a play in a site-specific location that was hard to find. I thought it might be small and insignificant and not worth the trouble of going out on a cold night. Boy, was I wrong!

Jason Wells has written a tight, sharp and engaging play about a future built on events that have actually happened in recent history. He speculates on a time when the seeds that have been planted by recent government and military figures bear fruit that threaten our rights and freedoms. Before you say, “Whoa! Too dark for me,” let me say that I haven’t laughed so hard in a long time. Wells has managed to create a fabulous comedy with ominous raw material in this treat for conspiracy theorists.

Of course, writing can go only so far unless it’s delivered as intended. Chelsea Haberlin’s direction captures us from the opening moments, as she has the audience enter a small-town Missouri jail amid the loud protestations of a crass detainee whose obviously limited education has not prevented her from learning every obscene word in the English language. Meet Tanya. Genevieve Fleming is stellar in her portrayal of this unlikely protagonist. We soon meet Shonda Cox, an “administrative officer” sent to calm the hysterical Tanya. Catherine Lough Haggquist is perfectly curt, tough and sensible in this role.

When Carlton Berg is hauled in by the Sheriff, Chief Swenson, the plot starts to move forward. Carlton is a government middle manager who has been arrested amidst the confusion of a government crisis, in which major institutions and figures have fallen and been overtaken by people who claim to be helping to restore order. The Chief is a dedicated police chief who faithfully follows the law. The trouble is, with a government gone, and its system disintegrating, there is some question as to what law there actually is. Daniel Martin plays out the frustration and desperation of Carlton Berg. His performance, a bit weak and repetitive in the beginning, gains steam and polish as events unfold. Paul Herbert as the Chief is very believable throughout the events of the play.

Allen Morrison and David Mott play two ostensible agents of National Security, Pittman and Lee, sent to question Carlton and seize secret information he is supposed to have. Morrison plays a great thug, and Mott plays a perfect mug.

The antics of the players and the twists in the plot keep the audience laughing out loud. The irony of the ending only makes us sorry that this small chapter, in this small corner of a threatened America, has ended. But then, big things start small. Go see the play.