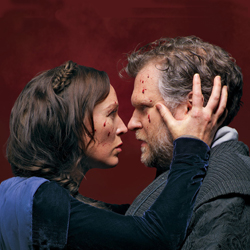 Bard on the Beach
Macbeth by William Shakespeare

Past experience has shown that Bard on the Beach delivers superior quality in all aspects of an evening of entertainment, from set, light, sound, costumes and stage management, to performance. History has rightly praised the playwright of theses productions, so the audience is left to judge the ambitious mortal attempts to do justice to his visions. In a word, this Bard on the Beach production of MacBeth is superb.

Direction by Siminovitch Prize winner Chris Abraham awakens in the characters an exploration into personality, inclination, motive, and reaction to consequence that gives powerful definition to the performance of every player in this production. The audience is rewarded as they see questions of opportunity and self-determination play on each other, twisting minds, beliefs and personalities into knots, and ending in unspeakable consequences.

This reward, however, relies on the excellent performances of the players. Ben Carlson’s masterful performance as MacBeth shows the gradual disintegration of brave and honourable character into insane megalomania. His decline is initiated by the persuasions of his ambitious wife, exquisitely portrayed by Moya O’Connell. Her descent into madness, accompanying her husband’s, culminates in a sublimely performed heart-wrenching scene so well executed that it tempts sympathy from the audience.

Craig Erickson’s portrayal of the savvy and faithful Banquo (and his ghost) is on point, a beautifully rendered vengeance for MacBeth’s lack of fealty and personal loyalty. Andrew Wheeler shines in his performance as MacDuff, a true and loyal foil for MacBeth’s treachery. His tormented conversation in England with a suspicious self-exiled Malcolm, ably played by Jeff Gladstone, contains words and lines that curiously remind this modern reviewer of modern times and conditions in a country neighbouring our own.

Special mention should be made of the “weird sisters,” often referred to in commentary as the witches. Emma Slipp, Kate Besworth and Harveen Sandhu are remarkable in their portrayals - by turns funny and eerie, and altogether brilliant and highly engaging in their performances. The true talent of the rest of the cast is not to be underestimated or under-appreciated. Individually, and as an ensemble, they cement this production into a captivating and spellbinding evening.

Commendations must go, also, to the technical experts who created and executed the brilliant costumes, sets, lighting, and sound effects. Costumes were true to Shakespeare’s period in design, colour, texture and function. The remarkably simple set served every function in every scene, from rooms in various castles to countryside heaths where the witches could be found, and foul deeds done. Lighting and special effects techniques were beautifully handled, moving the audience’s attention effortlessly and virtually without notice - a testament to the subtle mastery behind them. Similar mastery is evident, also, in the sound effects that pervaded the production, subliminally moving the hearts and minds of the audience through scenes of all moods - jovial, portentous, scheming, violent, pathetic and triumphant.

In fact, this production of MacBeth pulls and pushes us through all these moods and more. It reminds us of the frailties and strengths of the human spirit, of the considerations to be made turning wishes to actions, of the tension between ambition and conscience, and the elements differentiating tyranny from honourable accomplishment. These are timeless themes, meaning, of course, that we have not mastered them. Perhaps another look at these questions in this brilliantly performed production would help. Attend. Enjoy. Perhaps learn.