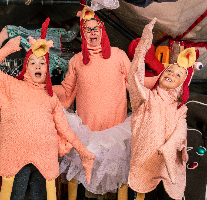 Since York Theatre on Commercial Drive re-opened its doors to Vancouver’s vigorous theatre-going public in 2013 with the inaugural production of Jack and the Beanstalk: An East Van Panto, the Cultch has repeated the tradition of staging a pantomime every Christmas. Despite the disruption that the global pandemic has had on the arts, the Cultch was determined to put on a Panto this Christmas. The savvy and spirited cast used the constraints of COVID-19 health orders to their advantage, with performers singing through facemasks and dance routines spilling over into the empty auditorium. Musicians Veda Hille and Barry Mirochnick are separated from the performers behind what are now familiar PlexiglassTM barriers.

It all starts with co-directors Maiko Yamamoto and James Long stumbling around in the dark inside a deserted York Theatre. At least they thought it was deserted until they come upon Veda Hille dressed in a lounge robe and (of course) a facemask. When the stage lights are turned on and Ms. Hille throws off her robe to reveal a black sequined dress, the show moves into overdrive in a bizarre mash-up of Cinderella, Phantom of the Opera and The Rocky Horror Picture Show.

Even if the irreverent comedy on offer is hardly your personal choice, there is something hilarious about seeing James Long as BC Ferry Godmother (ouch!), or Mark Chavez madly switching between his roles of Flyguy and the Phanto of the Panto.

I did find the counterplot of The Mouse, The Bird and the Sausage confusing, but that was probably the point. Like any pantomime, parts of the show are improvised, so each performance will be a little different. It also has the anomaly (for a streamed presentation) of a 10-minute intermission that actually lasts for ten minutes.