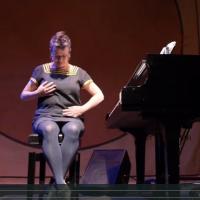 Regular Vancouver theatre-goers have heard Veda Hille in numerous productions, but likely not actually seen her on stage beyond playing piano accompaniment in pantomimes like Pinocchio. We’re certainly familiar with her work in Onegin and Peter Panties where she was music director. In Little Volcano, consummate musician Veda Hille becomes a performance artist where she couples music and storytelling in a solo autobiographical personal show.

Little Volcano was first seen in the PuSh International Performing Arts Festival early this year (pre-pandemic) to sold-out enthusiastic audiences. Watching a live stream version of a show on one’s laptop or Apple TVTM can never replace the experience of live theatre, sitting in the same room as the artist. However, it certainly provides a level of satisfaction and spontaneity that can’t be achieved by taped television.

With a selection of her self-penned songs, Johann Sebastian Bach preludes, a vinyl platter of frogs croaking and the odd well-known cover tune thrown in, Hille sets about entertaining her audience with an eclectic mix of songs that are at times lively, yet sometimes poignant. Kathy Hinde’s field recording of those croaking frogs played on a hi-fidelity turntable was a delightful segue to “Spring Can Really Hang You up the Most.”

The artist has led quite a full life with many personal loves and tragedies and heartbreak and happiness along the way. Hille frequently writes songs about love and tragedy and in this one-woman show we see where the inspiration comes from.

Maiko Yamamoto and James Long from Theatre Replacement help guide Hille’s oft-times quirky narrative, though very much with an arm’s length approach. With four different camera viewpoints, it was important to get the lighting just right and Sophie Tang does that. Orra White Hitchcock’s painting of “Sectional View of the Crust of the Earth” provides an interesting backdrop though is hardly intended as an accurate depiction.

In one of her engaging anecdotes, Hille relates the story of her family returning to Vancouver from Portland as a curious twelve-year-old in May,1980. Passing Mount St.Helene in Washington State and thinking “looks like it’s about to blow” – two days later it did! If Veda Hille would like us to think of her as a ‘little volcano’ that’s fine with me.