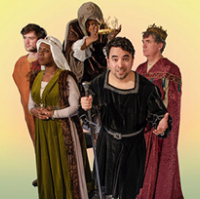 The Tragic Comedy of Macbeth written by Brent Hirose and David C. Jones of Literary Larceny Collective, with more than just a little help from William Shakespeare, is precisely what its title suggests – a spoof on Macbeth – the king who reigned over Scotland roughly a thousand years ago. The main twist in this mounting has Macbeth evading the fate suffered in all previous versions.

Brent Hirose leads a group of ‘game-for-anything’ performance artists in an improvisational style version of the Bard’s classic tragedy that relies on willing audience participation to keep the show rolling along. The show’s architects, Brent Hirose and David C. Jones ably carry much of the heavy-lifting themselves. Hirose in particular delivers an off-the-wall performance as Macbeth, frequently breaking down the fourth wall between the stage and the audience without ever seeming to break from character. David C. Jones busily takes on multiple roles (I counted eight), pushing their comedic elements to the limit.

That’s not to say other performers didn’t shine. Ali Froggatt is especially watchable in her main role as the ambitious Lady Macbeth. She even manages to retain some modicum of gravitas when those around her are (intentionally) losing theirs. In one of her speeches, she switches the delivery style based on a series of adverbs barked out by an audience member. In another scene, together with Brent Hirose she re-enacts an event from one couple’s early relationship.

Based on audience recommendation, each performance is set in a different geographical location and the actor who plays Banquo (Aidan Wight or Aidan Parker) takes on the persona of an animal chosen by the audience. Last Friday night, it was the turn of British Columbia’s Sunshine coast, while Banquo adopts the characteristics of a Belgian Malinois (hey, that’s improv, you just never know).

If you think that mashing Shakespeare with improvisational comedy is a tough gig, have some sympathy for co-directors Bernard Cuffling and Gary Jones, whose job it is to keep it on track. While the pacing of the show falters at times, with some scenes being stretched, the show never descends to the point where it loses the audience’s enthusiasm.

Audience members who willingly volunteer to help on stage deserve special kudos. If you enjoy improv theatre performed by a bold cast, then this show is for you.