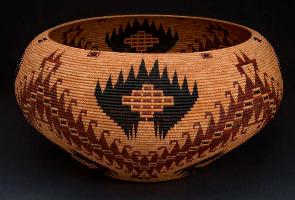 Where and When The Heard Museum, Phoenix, Arizona on now through April 5, 2020

The David Hockney’s Yosemite and Masters of California Basketry exhibit currently on view at The Heard Museum in Phoenix, through April 5, 2020, is a spectacular combination of drawings, baskets and collages of Yosemite Valley inspired art. The focus of the exhibition is on Yosemite Valley, and how that beautiful landscape has influenced artistic production across time and space from the Valley’s original indigenous inhabitants to one of the most celebrated artists of the 20th and 21st centuries. A brilliant combination of all three was on view: Yosemite Valley as location, magnificent woven baskets and David Hockney’s stunning AppleTM tablet computer (iPad) drawings.

This exhibit is the first showing of David Hockney’s work in Arizona, and it highlights the influence of the Yosemite Valley landscape on his very original art work,and it also shows how indigenous women, who were expert weavers of spectacular baskets, were inspired by the same landscape. They each made significant contributions to the field of art production.

Hockney first visited Yosemite in 1982 and some of his excellent photo collages from that trip are on view. He revisited Yosemite Valley in 2010 and 2011 and took his iPad with him to draw the landscape of the valley and those iPad drawings, created with BrushesTM App, are fantastic (he used his finger to render the landscapes in 2010, then in 2011 he used a stylus). Twenty-nine stunning examples, rich with vibrant color and printed on paper in a limited edition, are on view. Also, there are some very large iPad drawings of Yosemite in the exhibit -- printed on four sheets of paper, and each then mounted on four sheets of Dibond (brushed Aluminum composite sheeting) so we could get up close to view these (approximately) 8’ x 6’ brilliant works of art.

The collection of beautiful baskets on display were produced in the early part of the last century by Miwok and Mono Lake Paiute women. Lucy Telles, Leanna Tom, Carrie Bethel and Tina Charlie were well known in their day and their work was on display in the exhibit. These women were part of a group of Mono-Paiute women in the area who became known for their exceedingly fine, visually stunning and complex polychrome baskets. Each of the baskets were made with plant materials found in the region. Their innovations in basket weaving matched beautifully with David Hockney’s innovations with his iPad.

In a nearby room, iPads are set up so visitors can try their hand at creating their own iPad drawings – it is a great way to engage the visitor more fully with the exhibit, and information on how baskets are made, as well as animal and plant life in the Yosemite Valley area, is readily available.

The Heard’s Director David Roche’s initial idea was to advance American Indian art through emphasizing its intersection with broader artistic and cultural themes. Erin Joyce and Ann Marshal worked as co-curators to develop the storyline and draw out points of contrast and similarity while providing the necessary background history for the Yosemite-inspired art, baskets, drawings and collages.

If you are in the Phoenix area in the next few months, I highly recommend a visit to view this brilliant and informative exhibit.