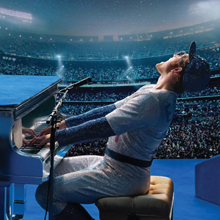 Movie Nights with the VSO
Rocketman: Live in Concert

Dexter French’s 2019 film Rocketman, is not as some have described, a jukebox musical, but is a strongly narrated dramatic biography of the early life and career of Elton Hercules (does anybody use his self-acquired middle name) John – formerly Reginald Dwight. Taron Egerton and Matthew Illesley share the lead role of the film primary subject, while director Dexter Fletcher carries out some ostentatious flourishes and surreal effects. Born in London, England, Fletcher was a stage actor before becoming an actor in important films like The Bounty with Mel Gibson and Sir Anthony Hopkins and eventually a director.

Elton John has been an alcoholic, a cocaine addict, a sex addict, so there is plenty of sex and drugs with the film’s Rock n’ Roll. It’s Taron Egerton‘s vocals that replaces the original Elton John in an incredible over-the-top performance. He sings almost all the iconic songs and leaves nothing behind in his delivery. Of course, it’s the musical creations of Elton John and Bernie Taupin that is the real star. Starting with The Bitch Is Back, ending on I'm Still Standing, and in between we hear Pinball Wizard, Daniel, Your Song, Crocodile Rock, Goodbye Yellow Brick Road and the title song Rocketman. Not every piece of music in the film is an Elton John hit. Classical music aficionados might be surprised to hear Mozart’s Rondo Alla Turca and Schubert’s Piano Quintet in A Major as part of the soundtrack.

Maestro Andrew Crust leads the orchestra in this live concert version of Rocketman, inviting the (smaller than expected) audience to be spontaneous in their appreciation of the music. The orchestra features both a grand piano and an electronic piano keyboard on stage, with the former leading most of the orchestrations. Rock music doesn’t always adapt to lush orchestrations, but Maestro Crust deftly handles the score so that it fits perfectly into the film’s narrative.

This is particularly evident in some of the film’s important scenes. As the orchestra blast through the rousing Saturday Night's Alright for Fighting, Matthew Illesley hands off the role of young Reggie to the adult Taron Egerton. The pair are seen and heard much later in the film as distinct voices during the orchestra’s ethereal playing of Rocketman. Near the end of the film, the orchestra’s sublime interpretation of Goodbye Yellow Brick Road features Taron Egerton and Jamie Bell (in the role of Bernie Taupin) in one of the film’s dramatic scenes.

Maestro Crust takes credit for not only leading the orchestra, but also gauging the orchestration’s precise synchronization with the action on screen. This was achieved without the audience able to notice any separation of the two elements.