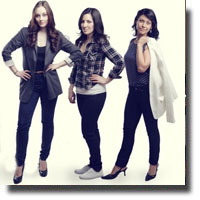 
Uncommon Women is a play about the challenges that young women face in a world of countless choices. Written by Wendy Wasserstein in 1977 and performed off-Broadway with an original cast that included Glenn Close and Swoozie Kurtz to name only two, the play’s message resonates today every bit as much as it did 35 years ago.

Directed by the very capable Jacqueline Bennett, the first scene opens with a reunion of college friends, seven years after they graduated. They bring each other up to date, and it becomes apparent that life has not unfolded quite as they had hoped. We are then taken seven years back in time to observe their college life and the aspirations of these young, bright, capable girls.

Each of the eight characters are played well, each expressing their struggles with becoming the amazing women they want to be while secretly wanting to be loved and cared for. This all happening at a time when the women’s movement is still attempting to hit its stride.

The core group includes Kate (Marianne Mandrusiak), the smart, sensible, attractive, and most likely to succeed, yet terrified of her future. Muffet (Toni Nielsen) waffles between the desire to be an independent, free-spirited women and finding the love of her life. Then there is Holly (Natalee Fera) - insecure, indecisive and longing for male attention. Rita (Sarah Szloboda) is the most uninhibited of them all with her obsession with sexual details while declaring herself a soon to be amazing woman.

Samantha (April Cameron) is adorable, good-natured and the only one in a committed relationship. We learn seven years later that she is still content in her marriage, albeit, living in the shadow of her husband and finding it difficult to carry on a conversation with his friends because she feels she has nothing worthwhile to say. Leilah (Leala Selina), and Carter (Jennifer Shirley) also add their own special quirky characteristics to the mix. Natalie Schneck gives a comic performance as Susie, an overzealous keeper of the college traditions, who is not a member of the group, but provides eye-rolling hilarity to the stage.

Sarah Arnold delivers a truly delightful performance as Mrs. Plumm, the amiable house-mother, who likes to include some sherry with the afternoon tea. The twinkle in her eye tells us that she has had her fun back in the day.

Uncommon Women is a very enjoyable experience; strong performances are given by every member of the cast; thought-provoking exchanges remind us of the struggles that young women then and now face as they move forward in their lives.