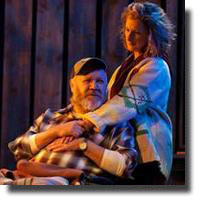 The Trespassers is a multi layered, coming of age play by venerable Canadian playwright Morris Panych. It’s an excellent example of allegoric storytelling, where Panych prefers the use of symbols to soften naked realism. The play is certainly a challenging piece of work, especially for actors as past and present action is intricately woven together to tell an emotionally involving story.

The storyline is driven by a fifteen-year-old boy’s relationships with his benevolent grandfather, his over-protective single mother and his grandfather’s carefree “paramour.” Lowell’s father has left the family homestead in this “mill town with no mill” long ago and with no older siblings, he relies on guidance from his folksy grandfather, Hardy (Brian Dooley) who teaches him, much to his mother’s chagrin, all the “important” aspects of life: like bluffing at poker, drinking beer and the subtle difference between lies, truth and improvisation. Hardy’s younger female companion Roxy, played with nuanced unrefined sexiness by Jennifer Clement, provides the youngster with eagerly received carnal lessons.

The play opens with the possibly bi-polar Lowell, played with alarming intensity by Amitai Marmorstein talking directly to the audience confessing to stealing peaches. His incidental narration throughout is purposely inconsistent so that the audience is never really sure if what they’re hearing is truth or subterfuge.

Director Ron Jenkins brilliantly executes the playwright’s device of the present scenes represented by an omnipresent police officer (Raphael Kepinski) who only interacts with Lowell, but not with any of the other characters. The balance of mise-en-scene is conveyed through a series of flashbacks facilitated by Kerem Çetinal’s seamless changes in lighting.

The character of Lowell’s unvarnished, Christian mother, Cash gets short shrift juxtaposed with the more colourful Hardy and Roxy, but Natascha Girgis provides a solid anchor that allows the play to flourish around her.

Who are “the trespassers?” According to Hardy, whose mysterious misadventure in the final scene affords the play’s main arc, contends no one is – “We all have the right to go where we don’t belong.”

I went to watch this show last April 8th as I was interested in finding out what “VocalEye” was all about. It’s a relatively new program of Kickstart, a society which produces and presents works by artists with disabilities. This particular program was first implemented with Playhouse’s presentation of Miracle Worker last year. Since then, Kickstart has collaborated with four more of Vancouver’s theatre companies --The Arts Club, Gateway Theatre, Presentation House and Touchstone Theatre-- to offer this service at least once during the run of a scheduled performance.

I spoke to Stephanie who was at the lobby explaining the use of the earphones, and she said that with some shows, especially the popular ones like the upcoming musical Hairspray, “VocalEye” tickets have been sold out and they’re trying to see if they could offer another evening. This usually happens especially for the more popular shows.

Basically, what “VocalEye” is all about is a live audio description of the show. It’s referred to as “Audio description”, and it brings the sets, lighting, costumes, and action of a theatre performance to blind and visually impaired audience members. A team of professionals provide key action and other visual information, between the actor’s lines, through a wireless transmitter to a single earpiece worn by the recipient. Description begins 15 minutes prior to curtain, with an introduction to the overall production and design concept, and other programme notes.

I closed my eyes in some scenes of this play to get a feel of how a blind person would imagine a performance as I listened to Kaira (the person who did the descriptions.) I must commend her for doing a good job. I talked to her after the show and she said that she had her script ready, but that she had to change it as the scene went on depending on how the actors would say their lines. Sometimes she had to talk fast, describing a scene or an actor’s movement to avoid overlapping on an actor’s line and thus, disrupting the flow of the dialogues. Often, she would describe an actor’s gesture and movement even before the actor would do them, during the pauses between the lines.

This is hard work and I really admire these folks who are doing this service for the disabled. For more info on this, or if you want to book seats for audio described performances you can contact the theatre companies directly or click on http://www.kickstart-arts.ca/audio-description.html.