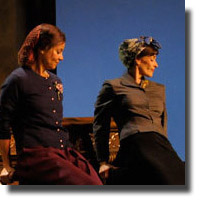 Carey Perloff and Val Caniparoli’s Tosca Cafe is a hybrid homage to San Francisco’s iconic watering hole. There isn’t really much of a plotline beyond the life and times of Tosca Cafe and its idiosyncratic bartender plus a vague backstory borrowed from Giacomo Puccini’s opera Tosca in which the female protagonist is a singer, whose voice seduces all who hear it and betrays the only man she ever loved.

What actual story there is relies essentially on Caniparoli’s original choreography impeccably performed by five dancers and mime acting performed with flawless vigour by five actors, some of which also play a part in the dance sequences. Tosca Cafe’s story is played out sans dialogue in a series of vignettes with each decade between the 20s and the 80s represented by the music, dance style and fashion of the time. This storytelling device works better with some decades than others.

In the 80’s dance scene, men and women in well-tailored suits illustrate the decade’s excesses. Local actor Peter Anderson and classical dancer Sabina Allemann pair up for a wildly entertaining gambit that has a smitten Anderson comically pursuing his partner around the floor. Less effective is the wanton 60’s scene where the elegant bar is over-run with hippies, flower children and Hari Krishna followers. Peter Anderson breaks the spell of performer’s silence (the only instance) -- which I was really starting to appreciate -- with a jolting interpretation of Lawrence Ferlinghetti’s beat poem I Am Waiting. The scene ends with the bartender breaching the “bartender’s code” – getting drunk in his own bar.

The only constants in the Tosca Cafe frame of reference are: the bartender (Dean Paul Gibson), the musician (Gregory Wallace) and the orphan (Annie Purcell). Gibson is brilliant as the omnipresent bartender, certainly no one’s idea of a dancer he nonetheless displays perspicacious understanding of stage movement. Wallace gives an incredibly nuanced acting performance as the musician who comes in from the cold, as well as showing exceptional athleticism in the dance sequences. Ms Purcell plays the orphan for real in only a couple of early scenes, but the first of these, where she plays off Gibson’s bartender is arguably the most entertaining scene in the whole production.

The choice of recorded music that comes from the bar’s perdurable jukebox ranges from the sublime Vissi d'arte, vissi d'amore from Puccini’s Tosca to the ridiculous Red Rubber Ball by The Cyrkle, in between we get June Christy’s I Don't Stand a Ghost of a Chance with you and Rosemary Clooney singing What’ll I Do?

Robert de la Rose deserves special praise for costumes that evoke periods that include: prohibition, the Great Depression, WWII and the ignominious eighties.

Tosca Cafe is great entertainment, but the dancing vocabulary is sometimes difficult to interpret. It’s a good idea for patrons to get to the theatre a little early and read the scenario in the programme – it will prove worthwhile.