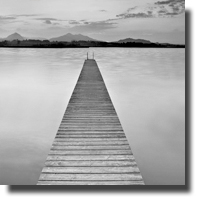 Osimous Theatre, a take-off of the word “awesome”, according to co-founder Parnelli Parnes, together with Bob Frazer, Derek Metz, Dawn Petten, Craig Erickson and Anna Cummer put the company together in 2010.

It was Parnes’ idea to debut with this award-winning play, and Frazer, in his directorial programme notes, liked it and found it provoking. Parnes who plays the narrator as well as other roles delivered his different parts quite awesomely (recycling the term again) as well as did the two other actors, Craig Erickson (Peter) and Dawn Petten (Kari).

I was most impressed by Petten. Her diction, projection and stage presence were simply awe-inspiring (I’m getting redundant). Erickson played his part quite well, and the dialogue exchange with Petten was remarkable. He sings quite well, and also plays the guitar, which these days is a must if you want to be a professional actor.

It is a play that is philosophical but at the same time earthy. Craig Wright has a Masters of Divinity degree. The play begins with the narrator giving us a treatise of this universe’s pavilion, and how the play’s theme is about time—time that can’t go back but just keeps moving forward, and can’t be changed. It’s the kind of play that strikes all of us in that many times we want to go back to the past and change things we regret doing, but we can’t.

This is an excellent play well-directed by Frazer and superbly acted by these three fine professional actors. I wish the company all the best and all kinds of success in their upcoming productions.

An Interview with Parnelli Parnes, actor and a member of the cast of the Osimous Theatre presentation of The Pavilion

I met up with Parnelli Parnes in the lobby of the Firehall Arts Centre about fifteen minutes after his outstanding tongue-in-cheek performance in Osimous Theatre’s inaugural production, The Pavilion. The programme lists Mr. Parnes only as “narrator” but his skill at picking up the roles of all the secondary characters (both male and female) is essential in moving the plot along.

Parnelli came to Canada from his native Philippines with his parents at the age of five, landing in Toronto where he spent his formative years. Without much thought about a career in acting, He obtained a B.Sc. from the University of Waterloo, majoring in Mathematics. His career focus obviously shifted, when, about ten years ago he enrolled at Studio 58 the professional theatre training program at Langara College.

Since then he has shown himself to be an extremely versatile actor, performing in such diverse productions as the Chinese opera Jade in the Coal as well as playing Don John in last summer’s Bard on the Beach presentation, Much Ado about Nothing.

He certainly seems to be enjoying his involvement with Osimous Theatre and working with director Bob Frazer. It was during the run of Bard on the Beach’s Othello that Parnelli struck a friendship with fellow actor Bob Frazer, about whom he cheerfully refers to himself as “Bob’s sidekick.”

Although he has found his many Shakespeare roles rewarding, he looks for roles where he can draw his own emphasis – “I like parts where there is no previous terms of reference”

While many actors might find themselves waiting on tables between paying gigs, Parnelli works at something that suits his personality and his academic aptitude. He can be seen presenting The Colour of Fire demonstration at the H.R. MacMillan Space Centre.

After working in Vancouver’s theatre scene for a few years now, he has come to accept the English pronunciation of his name (Parnz) rather than the Filipino pronunciation (Parn-ez).

Like many Filipino-Canadians, family is an important part of his life. He is married with two daughters of pre-school age and still regards his father Ambrosio as a positive influence on his career.