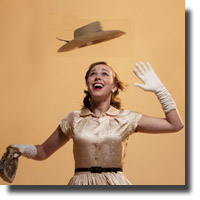 Patrick Street Productions
The Light in the Piazza by Adam Guettel

The cliché of the middle-class American abroad overwhelmed by a sophisticated Europe has been fodder for many Broadway style musicals. The Light in the Piazza, while simply showcasing Adam Guettel’s well crafted, though not particularly memorable tunes, manages to add a few interesting twists and turns.

While Craig Lucas’s basic storyline of a beautiful young girl with somewhat diminished intellectual capacity, closely chaperoned by her loving, though over-protective mother on an extended vacation in Italy is reasonably transparent, it doesn’t always take you in the direction that you expect to go.

As early as the second scene, while life around Florence is gradually waking up, a breeze carries Clara’s hat off her head and across the piazza where Fabrizio, a handsome young Florentine recovers it, and returns it to her. From that moment the two are instantly smitten; he with her simple, childlike innocence and she with his carefree charm. Clara and her mother Margaret are invited to have tea with Fabrizio’s family at their home. Even while the Naccarellis are totally accepting of Clara, Margaret harbours serious reservations about the pair’s whirlwind romance, but ultimately decides not to share them with Fabrizio or his family. Almost as a subplot, Margaret’s time in the city where she spent her honeymoon causes her to question the state of her own once romantic marriage.

In regard to overall performance, the vocal abilities of this cast pack quite a punch. Adam Guettel’s songs with their lack of strong melody lines are notoriously difficult to sing, but this group of performers are rock solid. Standouts are Samantha Hill who manages to overcome the awkward dichotomy of her character as Clara Johnson with a sensually resonant interpretation of her songs and Katey Wright as Margaret Johnson, who offers a layered acting performance along with adding emotional texture with her singing.

Particularly outstanding among the supporting cast are mezzo-soprano Dana Luccock as Fabrizio’s fiery sister-in-law Franca, whose beautiful voice lights up the theatre with The Joy You Feel and David Adams who brings an extra dimension to the role of the Naccarelli family patriarch. His duet with the older Johnson, Let's Walk provides one of the show’s most touching moments and comes closest to what we might relate to as a bona fide show tune.

Director Peter Jorgensen doesn’t quite overcome the difficulties of having the Italian characters speak and sing in Italian. It’s a noble goal, but not only does it create problems for the Johnsons, but for the majority of the audience who don’t happen to understand Italian. Jorgensen also uses a theatrical device where characters are motionless in a ‘freeze-frame’ that allows the audience to focus on the character driving the narrative.

The director and co-founder of Patrick Street Productions certainly brings a keen aesthetic and stylish staging to the production. Of course, he is helped by Jessica Dmytryshyn’s costumes and Lance Cardinal’s fascinating and versatile set.