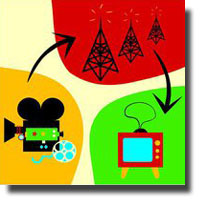 Funnyman and host of this improvised show was David Jones. Presented by Performing Arts Lodge (PAL) Vancouver as part of the City of Vancouver’s 125th Anniversary Programming, this event explores Vancouver’s colourful film and television history through conversation, music, and improvisational comedy. In his intro, he mentioned that this is the first of three parts, the second being a theatre cabaret, and the third, a drag show. These next two parts will be shown at a later date. .

In this first part, five panel members in the TV and Film indusry were invited to share their experience. This expeience was acted out by four improvisers, members of The Bobbers. The second part had four members of the audience who were quizzed with 10 trivia questions by Jones. The panel members of course had most of the answers, but the award was given to the panel of audience members.

It was an entertaining and funny show, but like all improvisations, the show went on for 2.5 hours with no intermission, which was a bit of a bother for a mature audience, who needed to take bathroom breaks.

Jones should have paced the show so the improvs and the sharing from the panelists woudn't have taken too long. 2.5 hours with no intermission is too much.