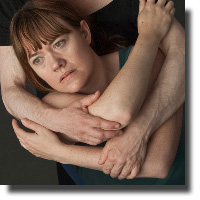 When the curtain rises on Marsha Norman's ‘kitchen sink’ drama, 'Night, Mother, it’s a typical Saturday night and the wall-mounted clock that is an integral component of Kari Gundersen’s functional set shows 8:05 – it’s also the precise time off-stage in the real world. The play is set and performed in real time over roughly ninety minutes leading up to the final scene.

Jessie (Bronwen Smith), a plain looking woman closing in on middle-age, enters the room scurrying around the kitchen as if there wasn’t a moment to spare. And as we eventually discover, there are for Jessie, not many more moments to spare. Even before Jessie off-handedly remarks with a straight face “I’m going to kill myself, Mama” while calmly loading her late father’s revolver a few scenes later, you just know that she is embarking on a suicide mission. Even the apostrophized title suggests a certain finality.

The question is, why? Jessie’s life is far from perfect; some might say mundane, but assuredly not miserable. She is epileptic and occasionally gets seizures, but otherwise able-bodied. Could it be from a desire to “punish” her ex-husband for leaving her ten years earlier? Or possibly to give her delinquent son a perverse wake-up call?

In the numerous exchanges of varying levels of intensity she has with her mother Thelma (Wendy Morrow Donaldson), she refutes any implication of antipathy. She simply claims that her plan is well thought out and is solely based on complete enmity for (her) life, having given up on the person she would like to be and possesses no optimism for improvement in the future.

Despite the play’s morose subject, it is not without some charming lighter moments, mostly coming from the older actor whose character blames her late husband for just about everything.

The Performing Arts Lodge Theatre on the eighth floor of an apartment building in Coal Harbour, that provides affordable housing for former performing arts professionals, offers an intimate theatre space that at times presents some interesting and thought-provoking plays by independant companys.