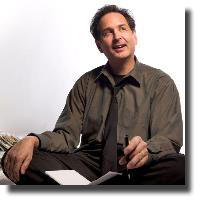 When I initially heard about The Story of my Life and it’s all too brief run in New York a couple of years ago, my mind immediately arced back to the fifty-year-old song written by Burt Bacharach and Hal David. Of course, the Marty Robbins hit isn’t one of the sixteen songs that serve to drive this story forward. In the case of this two-handed lightweight chamber musical, the title is a tad misleading. It’s less about a life story, but rather more to do with a yet to be composed and delivered eulogy.

Boyhood pals Tom Weaver (Stephen Aberle) and Alvin Kelby (Jonathan Holmes) had once made a pact with each other in their pre-teens (after all, one cannot be too well prepared in these matters) that would have the survivor delivering a eulogy over the other. Tom now finds himself trapped in this promise with acute writer’s block. To fulfill his contract, Tom calls on the only resource he has available - his distant memories of Alvin before their friendship derailed. In the process he learns why and how things went wrong.

Brian Hill’s storyline is presented in a series of vignettes with Neil Bartram’s songs defining the narrative. While not possessing especially mellifluous voices, they each perform with sublime sensitivity on the show’s most poignant tunes. Particularly, with one of the sweetest songs in this show, about their first grade teacher Mrs. Remington, A lady with a big heart and a facial hair problem in whose class they first met.

Hill’s writing occasionally borrows a little too heavily on references to Frank Capra's It's a Wonderful Life. Alvin even perceives his life shadowing Capra's protagonist, George Bailey. As boys, watching the movie was a Christmas ritual.
Drew Facey’s surreal all-white set of columns of books and manuscripts is largely symbolic —representing the ideas inside Tom's head as well as Alvin's bookshop. Facey’s clothing might also be considered as symbolic, with Alvin dressed in celestial off-white and Tom suited in soulless grey.

The Story of my Life is ideally suited to the actor-friendly 200-seat Revue Stage theatre with its generous thrust stage that allows the audience to see three sides of the action. Director Valerie Easton takes full advantage of the intimate setting, cleverly maintaining the play’s allegoric elements while allowing the performers to steer the show forward.

It’s an engaging and in some measure satisfying bittersweet portrait of a lifelong male friendship. To paraphrase Alvin Kelby – Why do people wait until you die to say nice things about you?