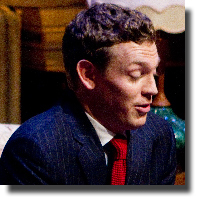 Recently widowed octogenarian Mr. Green (his given name is never disclosed) still cannot come to terms with the loneliness incurred by the loss of his wife of 59 years. He now lives in a walk-up Manhattan apartment with only memories and his devout adherence to his Jewish faith.

Ross Gardiner, a young American ExpressTM executive, whose reckless driving almost results in serious injury to the older man. The subsequent court order stipulates weekly community service visits to be rendered by Ross, but is as much a punishment for Mr. Green.

The play opens as Ross comes to visit Mr. Green for the first time. Even though Ross arrives with a parcel of food from a local kosher deli in hand, the meeting does not go well. Mr. Green wasn’t aware of the court ruling that obliges Ross to make visits to his home and likes the idea even less.

When, on the second visit, Ross professes that he is also Jewish, Green becomes more agreeable to his presence. But just when the old curmudgeon begins to accept the younger man as part of his new realization, Ross admits to being a “feygele” (Yiddish for homosexual). Green predictably responds by reverting to ‘old-school’ Judaism and attempts to discourage his visitor from this “ungodly” lifestyle.

As the eponymous Mr. Green, David Adams, who is really too young for the role, channels wobbly vulnerability that gives vent to a range of emotions from rancour and rage to affliction and acceptance as he attempts to preserve his traditions in a contemporary world. Ross Gardiner, played with great sensitivity by Nicolas Rhind, has an antithetical struggle as a gay man rejected by his conservative family.

Director Neil Scott never allows the play to become maudlin, using Adam’s natural comic timing to full advantage. I liked his device of having a phantom housekeeper occupy the audience’s attention between scenes.

Visiting Mr. Green is a tender comedy that delivers an uplifting message. Even in progressive cities like New York (or anywhere) people cannot always embrace fundamental tradition or controversial lifestyles.