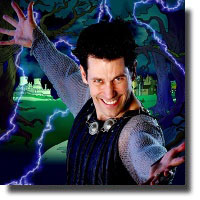 When you cross-pollinate Shakespeare’s Macbeth with Matt Groening’s The Simpsons you can pretty much expect... well, anything. Creator Rick Miller should get credit for truth in advertising. From the title, MacHomer it offers exactly what you would expect. To excogitate maximum enjoyment from the show, sufficient familiarity with all of The Simpsons characters, even the fringe ones, is essential.

Homer, of course, is Macbeth, Marge goes against type as the power-crazed Lady Macbeth, Montgomery Burns (Homer’s employer at the Nuclear Power Plant) is King Duncan, Homer’s halfwit sidekick Barney Gumble is Macduff and so on. Miller is a natural mimic and his take on these cartoon characters is dead on.

Miller is moderately faithful to the basic outline of the Bard’s play, although there’s enough of the Simpsons character’s personality thrown in to keep the audience giggling. He moves the show along at a frenetic pace, adapting Macbeth through the entire cast of The Simpsons. I even wondered whether he would maintain this energy level for the entire performance. As it turned out – he does. And in a perverse way, the show suffers slightly from this. Miller’s performance at times seems like it’s on steroids, so it can be quite a challenge for the audience to keep up. If you lose focus, you might get left behind.

Beth Kates’ set is simple. An over-sized, outdated television set behind a consul. I found that I spent roughly equal time watching the screen as Rick Miller’s on-stage antics. The Playhouse might actually be too large a venue for Machomer. It would seem to be better suited to a smaller stage.

It’s too bad that there are only four performances in this run; all over this weekend (14 & 15 May) – this is a show you really need to see twice.