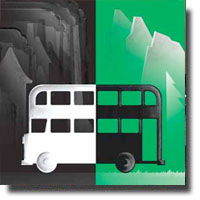 The Great Divorce is Clive Staples Lewis’s Kafkaesque speculation on what awaits us all after our eventual death. The odd title presumably refers to the separation of Heaven and Hell. The story places Lewis (Evan Frayne) himself at the centre who is inexplicably trapped in a grim and doleful place which could be either Hell or Purgatory depending on one’s religious beliefs.

The normally pristine Pacific Theatre’s stage floor is covered with a heavily soiled tarpaulin and the ceiling is similarly concealed. Stage lighting from the sides gives the theatre a surreal look. I’ve no idea what Hell looks like, but I’m willing to accept Lauchlin Johnson’s visual concept.

Lewis joins a motley assortment of malcontents waiting for a bus that no one seems to know where it will take them. None of these characters have actual names – they are identified by descriptive monikers like: Nervous man, Waspish woman and Robert’s wife (we never meet Robert).

When the bus finally reaches its mysterious destination, the ‘dirty’ tarps are removed to reveal a reflective floor and ceiling and we now see that the occupants on the bus are actually ghosts who have arrived at a gateway to heaven. However, entering paradise is much more difficult than jumping on the right bus. New arrivals are greeted by “solid people” who initiate and encourage conforming to a more meaningful state of existence by abnegating all that shackled them in their previous life.

Lewis meets MacDonald (Jeff McMahan), a writer who was a profound influence on his own work and who now becomes his tour guide as together they observe the newcomers’ struggle to shed themselves of evil tendencies and soulless pleasures that they have become all too comfortable with.

Director Kyle Rideout, a veteran of quite a few ‘Bard on the Beach’ seasons maintains a slick pace, keeping the focus on the play’s thought-provoking message without being preachy. It’s difficult to single out anyone from the thirteen member cast, many covering two or more roles, since each member carried equal responsibility for the show’s success.

The Great Divorce is hardly Sunday school material but it does offer an imaginative treatise on mankind’s inability to embrace the opportunity for paradise – even at the low cost of rejecting misery.