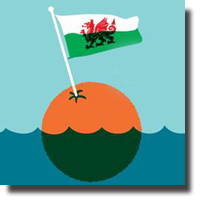 A Welsh island makes a break from Britain, and reality, in this inventive adventure. In 1982, the island of Anglesey miraculously tears free, taking the bewildered residents on a journey that reaches as far as the Arctic Circle—but will they ever get home again? Do they even want to go back?

For once, I am nearly speechless after witnessing what Hughes referred to as “a ride of the imagination.” The spectacle that occurred on the Revue Stage is something difficult to describe to those who weren’t present, and one that creator and performer Hugh Hughes assured us “doesn’t have to leave this room.” The evening started out as a bit of a stand-up comedy act, but soon turned into something truly remarkable. Through a mix of multimedia, including PowerpointTM presentations and even an overheard projector, Hughes helped bring a story from his childhood to life. Was it reality or make-believe? Perhaps Luis Bunuel said it best in a quote that was a featured projection in the show:

Our imaginations and our dreams are forever invading our memories and since we are apt in believing in the reality of our fantasies, we end up transforming our lies into truths.

My favourite part of the evening was an on-stage recreation of the 1982 earthquake that separated Anglesey from Britain. Hughes, who plays himself, and Rowlands, who plays everybody else, demonstrated how focusing on the minute aspects of an event (for example, pebbles falling from the bridge into the water) can bring an experience to life more effectively than a large-scale recreation can attempt to. I also enjoyed the personal touches of the performers passing props around the audience, and giving certain audience members special tasks to complete throughout the course of the show.

Floating was the first play created by Hughes, an emerging artist from Wales, who has since toured his works across the UK and the world.

Everyone who considers himself a performer, a director, or a designer, and anyone who has ever considered a career in the arts should definitely see this unique production. It will allow you to think outside the box and really pause for a moment and consider what it is exactly that you are creating in that special space, at a designated time, with the people who make the decision to come watch what you have to offer them.

I’m not sure if the labels “play” or “multimedia performance” accurately describe the production. Hughes admits that even he isn’t quite sure how to classify what he does, but he believes it doesn’t matter what you call it, as long as he manages to make a connection with each and every audience member. Judging by the handshake we each received on the way out the door, he certainly achieved that goal.