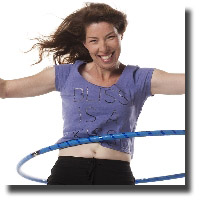 Circle Mirror Transformation is American playwright Annie Baker’s fragmental, multi character study. Set in roughly present time in a community centre dance studio in Vermont, the play invades the lives of five people – one instructor and four participants – over six weekly sessions. For those folks who have never attended a drama class, this disparate group look like they might be involved with anything from new age yoga to a self-awareness class.

Marty (Donna White) is the vibrant instructor, who might have less control over her personal issues than at first appears. Her oldest disciple is James (Alex Diakun) who is also her husband and is distressed over his relationship with his estranged daughter. Schultz (Brian Linds) builds chairs and is still trying to come to terms with his divorce. He believes that the panacea is to embark on an emotional relationship with his class-mate Theresa (Anita Wittenberg), who is also struggling to get over a former abusive boyfriend. The forth partaker is sixteen-year-old Lauren (Emilee-Juliette Glyn-Jones), a kooky misfit attending remedial high school. She is the only member of the group with a definite goal - harbouring aspirations of playing Maria in a high school production of West Side Story.

It’s Glyn-Jones’ character that undergoes the biggest transformation. Initially, coming across as a sullen nonconformist, but eventually, displaying acute observational skills as evidenced in the final scene playing out a double-handed exercise that moves the epoch ten years into the future.

As the weeks progress the participants take on more absurd acting exercises. One of which involves class members swapping the identity of a class mate and spilling out their lives in the form of improvisation. It’s this device and the casual moments that they share during the numerous breaks in which they divulge poignant truths.

I liked David Roberts set. Implicative of just about any dance studio or fitness room one might find themselves stepping into in their own community. A pilates ball and a hoola-hoop are the only props seen, a door at each side of what appears to be a two-way mirror reveals a changing room on the other side of the glass.

With all five actors on stage almost through the entire performance, this is truly an ensemble work. Led by a director who surely knows how to work with actors, this mounting of Circle Mirror Transformation just about manages to overcome the repetition and some slow scenes in the first act and give the audience a reason to leave the theatre thoroughly satisfied.