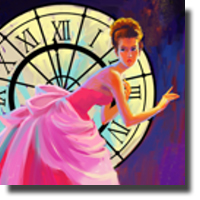 Do I love you because you’re wonderful, or are you wonderful because I love you...? Well, I may not be able to answer this eternal question for the waltzing lovers in Rogers and Hammerstein’s musical Cinderella, but I can say, with confidence, that Exit 22’s adaptation of their tale was wonderful. This theatrical production was directed by the very talented Gillian Barber, with musical direction by Kevin Michael Cripps, and brought to life by a hidden live orchestra and a cast of very talented Capilano University students.

Barber stayed true to Rogers & Hammerstein’s concept, transforming a classic fairy tale in to a beautiful collage of music and dance, while at the same time bringing a humorous tone to the tale, creating a delight for all ages.
Aside from the enchanting orchestral work being done behind the scenes, the assortment of whimsical characters, and the amount of vocal talent and presence that appeared on stage really impressed me in this production. From the amazingly annoying stepsisters and brutally awful stepmother, to the adorable ballet dancing mice and the seemingly intoxicated palace chef’s, each actor brought their own personal style in to their performances, making the show quite unique.

I was particularly impressed by the Prince, played by Cameron Dunster, who after a few minutes on stage seemed to fall in to his character, and the spotlight, with ease and comfort. Another actress that stood out for me was Erin Walker, who doubled as Charlie the Cat and one of the goofy chef’s. Her use of body movement and facial expressions reminded me that one does not have to be in a main role to stand out in a crowd. Cinderella, played by Ranae Miller, was also a delight to watch, as was the rest of this gifted ensemble.

I left the Capilano Theatre happier than when I walked in, which to me is the ultimate mark of time well used and a performance well enjoyed. I encourage the community to support the Capilano Performing Arts Theatre by coming out to this performance and letting yourself be enchanted by this timeless tale of love conquering all, and dreams coming true.