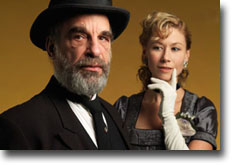 The Merchant of Venice by William Shakespeare

Among Shakespeare’s more popular plays, The Merchant of Venice has given way to more misconceptions than probably any other: Firstly, despite some dark moments, it’s not a tragedy – it’s a comedy – and Shylock, the Jewish moneylender, is not the central character nor is he the eponymous merchant from the play’s title – that honour goes to Antonio. But it’s the notion that the Bard’s canny satire on Venetian mercantile practices heads perilously near, if not boldly venturing into anti-Semitism that is perhaps the most common misconception. In the right director’s hands, the play actually draws sympathy to Shylock, or "The Jew," as he is generally referred to by offering an allegory for the plight of Jews over the last century.

Director Rachel Ditor puts this production of Merchant in Venice exactly 150 years ago at the end of the period known as Risorgimento (Reorganization). Antonio is a shipping magnate who may or may not have homosexual leanings, though, the physical affection between he and Bassanio goes beyond camaraderie.

Antonio (Duncan Fraser) unselfishly borrows money on behalf of his friend Bassanio (Charlie Gallant) in order to finance his quest to travel to the island of Belmont and hopefully marry the beautiful Portia (Lindsey Angell). He turns to Shylock (Richard Newman), whom he would not normally prefer to conduct business with. Initially the moneylender also shows reluctance towards the transaction, but eventually agrees to provide the loan, interest free on condition that he could claim “a pound of fair flesh” should Antonio default on repayment. There is some ambiguity as to whether these terms were a favour or a trap.

Shortly after the deal is struck, the hand of fate deals both men a cruel blow. Shylock’s daughter Jessica (Luisa Jojic) steals his money and makes off with a Christian lover, thus offending his traditional Jewish sensibility. Feeling disgrace, he is primed to seek restitution from the marine merchant when his fleet is lost at sea and is unable to repay the loan.

Meanwhile, back at Portia's palace in Belmont, represented on the same sparse tiered stage, potential suitors are lining up to attempt to overcome the challenge that Portia’s father has set up; with the successful suitor winning the hand of the beautiful Heiress. Luc Roderique as the flamboyant Moroccan Prince and John Murphy as the pompous Aragonian Prince are deliciously over-the-top in a marvellously entertaining piece of Comedia dell'Arte.

The gorgeous Lindsey Angell gives an intelligent and charming reading as the bodacious Portia who, like many of Shakespeare’s heroines must disguise herself as a man to be acknowledged as a learned judge. Duncan Fraser and Richard Newman are brilliant as adversaries on the opposite sides of a transaction that went wrong in the thrilling court room drama. Ryan Beil, who also has a role in As You Like It, the parallel Mainstage production, is customarily droll as Gratiano, a friend of Antonio and Bassanio.

Among the supporting roles, I liked Kayvon Khoshkam, who added to his growing reputation by showing his penchant for comedy as Lancelot Gobbo (and Prince of Aragon’s servant), after gaining acclaim in the role of Benjamin Braddock in this Spring’s Artsclub production of The Graduate.

Mara Gottler’s spectacular detailed clothing is accurately characteristic of an affluent Italy in the mid-nineteenth century.

Rachel Ditor has put together a first rate mounting of one of Shakespeare’s more complex plays, in terms of both acting and production quality. She strikes a near-perfect balance of pace and panache. Future attendees to this play need have no feelings of trepidation about Ditor’s adaptation.

The brand new Mainstage Theatre tent affords patrons more comfortable seats and a better seating arrangement. And with reserved seating, gone are long line-ups all around the fencing that last year’s patrons had to endure to claim a good seat.