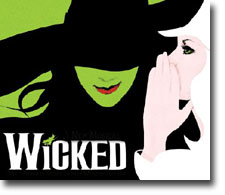 WICKED music and lyrics by Stephen, book by Winnie Holzman

Hollywood would likely call Wicked a prequel, but in truth it’s an imaginative revisionist and darker version of The Wizard of Oz that borrows as much from The Incredible Hulk as it does from Frank L. Baum’s original story. Before Dorothy trod the Yellow Brick Road to the Emerald City, Elphaba, the Wicked Witch of the West and Glinda, the Good Witch of the North were unlikely fast friends.

It turns out that Elphaba (Anne Brummel) wasn’t any more wicked than the vain and shallow Glinda (Natalie Daradich) – she just needed a good publicist. Having emerald green skin and wearing dark frumpy clothes certainly didn’t help her cause. On the other hand, the blonde, fair-skinned and perky Glinda, who, despite being far too self-involved for her own good, had public relations down to a fine art.

Disowned by her father and charged with the responsibility of looking after her tragically beautiful sister, Nessarose (Michelle London), Elphaba has one thing in her favour. She has the gift of magic, which she only resorts to when pushed into losing her temper. This alienates her from everyone even more; everyone, except Madame Morrible, the devious principle of Shiz University who dispatches her to “the wonderful” Wizard.

With Universal PicturesTM the primary producer, you just had to anticipate that that this show would rank as one of the most dazzling tour productions ever to blow through this city. Certainly, in terms of quality production values, no expense has been spared and it shows. Costume, lighting and set design leave the audience awestruck and special staging effects physically and musically “Defy Gravity.”

But Wicked also works on many other levels. Stephen Schwartz’s soaring melodies like the show-stopping The Wizard and I delivered by the powerhouse voice of Ms Brummel who plays the green-skinned outsider. Torontonian Natalie Daradich, the lone Canadian in the talented cast is a perfect foil for Brummel’s heartrending performance. She imparts whimsical humour that subtly pokes fun at herself with impeccable comic timing.

Veteran screen actor Don Amendolia is charmingly vaudevillian as the mendacious Wizard in his showpiece self-promotion song, Wonderful. But Jody Gelb is almost too cartoonesque as ‘orrible Morrible and David Nathan Perlow is a little too earnest as the heroic Fiyero who is the third side of a love triangle with Elphaba and Glinda.

Wicked is hardly a cautionary tale, but it does offer some thought-provoking truisms. The two female characters reveal the complex moral issues of friendship in their duet For Good near the end when Elphaba sacrifices herself at the altar of failure, so that Glinda might succeed. In the song No Good Deed (goes unpunished, no act of charity goes unresented) Elphaba proffers a cynical maxim that shows that even well intentioned acts can go horribly wrong.

In Broadway Across Canada’s production of Wicked there is a lot to like and very little to loathe.