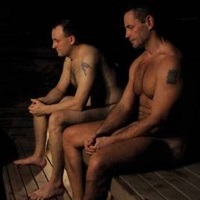 The Kay Meek Centre, on January 21st, was home to DOXA’s first-ever screening in West Vancouver. As part of their monthly film series, DOXA took the film Steam of Life across the inlet to the beautiful Kay Meek Centre.

Playing to a full house, Steam of Life (directed by Joonas Berghall and Mika Hotakainen) is an 80 minute documentary on Finnish men in Saunas. The title in Finnish translates to “men’s part,” which is an entirely accurate name as it exclusively focuses on men, and how saunas help them cope and articulate problems that society encourages them to hide and internalize.

The film is almost a sociological study of how men can open up and reveal incredibly intimate, and personal details in a sauna that they might otherwise keep inside. As one man said, Finnish men are known to be tough, but in these saunas – these spiritual sanctuaries – men are allowed to confront their deepest emotions.

At times heart wrenching, and at time hilarious, the Steam of Life films men from all over Finland: the remote and solitary far north, and the more urban south. The stark, beautiful landscape helped ease the emotional intensity of the film at times as men were brought to tears as they recounted their inner pains: deaths of loved ones, losing children through divorce, childhood traumas, and personal demons.

Just as humans come in all shapes and sizes, so too, do saunas. From tents, to trailers, to urban public saunas, woodsheds, deep below the earth in an industrial mine, and even a telephone booth, Steam of Life also demonstrates how saunas are completely entrenched in Finnish culture.

After the film, festival organizers called up director Mika Hotakaninen in Finland on Skype for a for question and answer period. Fielding questions from the audience for nearly half an hour (at what was surely a ridiculously early hour in Finland), Hotakaninen illuminated salient moments of the film and the technicalities of its production, its inspiration, and the men who make it what it is.

Steam of Life is a beautiful film, relevant across cultures, and presents an intimate view of Finland that has heretofore been concealed.