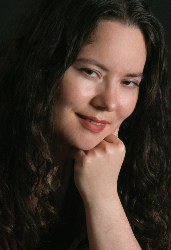 For Rachel Kiyo Iwaasa, Cosmophony has been a three year creative journey. The title is a linguistic blend of cosmos (harmonious universe) and phone (meaning sound). Cosmophony is a contemporary Planet Suite for solo piano. However, the work can hardly be likened to that grand euphonic masterpiece by English composer Gustav Holst.

The compositions are as individual as the planets themselves and all of are named after the planets and written especially for Iwaasa by composers Rodney Sharman, Marci Rabe, Alexander Pechenyuk, Jocelyn Morlock, Chris Kovarik, Jeffrey Ryan, Stefan Udell, and Jennifer Butler. Fragments, an earlier work by Jordan Nobles is also included and is intended to evoke the asteroid belt roughly located between the orbits of Mars and Jupiter.

The program opens with Denis Gougeon's magniloquently virtuosic homage to the sun, Piano-Soleil. From there each composition portrays the astrological trait of the planets in our own solar system in order of distance from the Earth. The exception is Pluto which is no longer a true planet, according to the official definition by scientists. Its place on this selection is taken by a planet not even in our solar system; Gliese 581c, with a mass approximately five-and-a-half times that of our own planet, is actually classified as a Super-Earth. In its early discovery, Gliese 581c generated much interest because it was thought to have an atmosphere and even weather, thus, potentially capable of supporting life forms similar to Earth.

Among the most interesting excerpts is Marci Rabe’s economical Venus. Peaceful and languid, its many silent passages evoke the mystery of this cloud-cover, slow-turning planet. Jocelyn Morlock's atmospheric vision of Mars is elliptical phantasm provided by the planets twin moons Phobos and Deimos. Jupiter by Christopher Kovarik is a jazz inflected arrangement and possibly the most accessible selection.

Simultaneous with the playing of this programme, simulated images created by Erik Koelmeyer of the MacMillan Space Centre were projected onto a screen on the back wall, giving the music an extra dimension.

Ms Iwaasa concluded her recital with George Crumb's avante-garde Makrokosmos Vol. II: 12 Fantasy pieces after the Zodiac. Of all the music heard this evening, this is the most other-worldly. It felt as if it was entirely improvised, but in fact faithfully follows the noted score. During the performance of this work, Ms Iwaasa frequently employs the fascinating (some might say flashy) technique of ‘strumming’ the open piano strings with riveting effect.

You can find out more about the reording by visiting: cosmophony.com