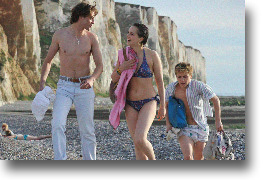 In French with English subtitles

When 16-year-old Alex (Félix Lefebvre) takes a friend’s small boat on the water and carelessly capsizes, then is rescued by the charismatic David (Benjamin Voisin), it sets off a fast and ephemeral friendship that turns into something much more. Adapted from Aidan Chambers’ novel Dance on My Grave, François Ozon sets his film in the idyllic resort town of Treport, just across the English Channel from Eastbourne.

Initially, Alex is guarded over why David, who is a couple of important years older, would be so eager to be ‘friends for life.’ The pair even make a bizarre pact about the survivor of the two dancing on the other’s grave after death. Nevertheless, Alex cannot help being besotted, even becoming obsessed by his new soul mate. That is, until Kate, an English au pair comes between them. François Ozon himself offers the spoiler almost at the beginning of the film, when he tips us off on how the relationship ends. But the film still manages to enthrall, because we want Alex to come out at the other end.

The film offers excellent performances from its three young stars. In particular, Benjamin Voisin, who crafts a nuanced realization in the role of the quixotic David and Belgian actor Philippine Velge in her debut film will worth looking out for in future films.

Ozon gets everything spot on to give the sense of being in the mid-eighties. The film is very French, but the soundtrack is British, with contributions from Rod Stewart, Bananarama and The Cure that just seem to fit. 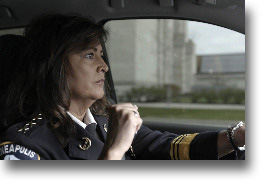 Deirdre Fishel’s well-intentioned cop doc takes viewers on a guided tour of the Minneapolis Police Department with specific focus on five female officers: Alice White, Melissa Chiodo, Erin Grabosky, Catherine Johnson and Janeé Harteau. Because the film was put together in 2019 and released earlier this year, just prior to the death of George Floyd, an African-American man at the hands of Derek Chauvin, a white police officer, it’s difficult to get past the irony of such a project. Of course, one cannot blame Fishel for not having a crystal ball, but her sympathetic treatise of her undertaking may even alienate otherwise neutral observers of the malaise that would seem to exist in big city police forces in the United States (and perhaps elsewhere).

All the women studied in this film displayed dedication and professionalism. Though perhaps, the most interesting subject is Janeé Harteau, an openly gay Native American woman and the first female Minneapolis Police Chief. When the film opens she comes across as a popular and progressive leader. Unfortunately, she becomes a casualty in the killing of Justine Damond by Mohamed Noor, a black police officer. She was replaced by a less progressive Medaria Arradondo. Alice White is one of only six black female officers on the force. White awkwardly admits leaning favourably towards people with her own skin colour in blue versus black issues. Rookie patrol officer Erin Grabosky, whose father is a retired cop, is anxious not to appear too empathetic in front of her male counterparts. Commander Melissa Chiodo and Inspector Catherine Johnson are hardened veterans who have worked hard over many years to gain the respect of their colleagues.

While Fishel’s engaging documentary is largely disappointingly benign, it does manage to underline that police forces in general see themselves primarily as enforcement and as public protection secondary. In the accidental conflict between the police and the communities, perhaps it’s time for both sides to look inward. 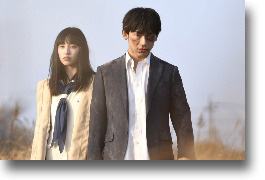 In Japanese with English subtitles

Japanese cult director Hiroyuki Tanaka, who more often goes under his pseudonym SABU has returned to filmmaking with the multi-genre Dancing Mary. Kenji Fujimoto, played with kamikaze verve by pop singer and actor Naoto Kataoka, is a slacker who turns ghosthunter. He gets help along the way from a high school girl who seems to possess psychic powers (Aina Yamada) and Yakusa warrior (Ryo Ishibashi).

Fujimoto is assigned to smooth the way for the demolition of a defunct dance hall and clear the way for a new shopping centre. No one wants the job, least of all Fujimoto, because the place is inhabited by the ghost of Mary a former dancer who is faithfully waiting for her lover to return.

Typically for Sabu, the film’s structure is all over the map. It starts off as a modern ghost story, but then part way through becomes a black comedy before finally ending up as a Japanese gangster romp. Sabu would seem to have many ideas in his head at the same time and wants to explore them all in the same film. Certainly, at some levels it works and the film does provide laughs. There is one scene that runs for about ten minutes where we see two female cancer patients with matching names indulge in persiflage, goading Fujimoto into searching for his purpose in life. Whilst the scene appears to be expanded beyond what is valid, it does have a central bearing on the film’s core theme. And while Sabu’s direction seems at times to be scattered, it’s nonetheless entertaining. 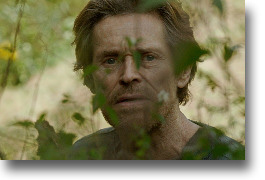 Abel Ferrara’s graphically surreal film about a loner struggling to find purpose should not be confused with Matthew Ross’ 2018 crime thriller which starred starred Keanu Reeves. The titles are identical, but that is the only commonality.

In Ferrara’s Siberia, Willem Dafoe is Clint (though we never hear his name mentioned by another character), a man who lives in a quagmire of self-imposed isolation, both geographically and emotionally. Stationed in an outpost on the very edge of the last place on earth, his only human contact is with Aboriginal locals who only speak what seems a dialect of Yeniseic, a language that the protagonist has no desire to learn for himself. Clint’s physicality is certainly present in this lonely wilderness, but his mind and his soul (if he even has one) is in some kind ethereal entity.

Ferrara offers this concept from his own imagination in a surreal progression of dreams, nightmares and hallucinatory visions of family members. Dafoe, who is at his craggiest best, navigates this exploration through his fears and (mostly sexual) desires. For someone who has sought desolation, sex plays a big part of his psyche.

The film doesn’t offer much dialogue and what there is seems truncated, even from its central character. I find that in general, films that depart from the conventional narrative into the realm of the surreal need to rely on good editing and direction, otherwise the audience can get lost. I'm not sure that film had either. 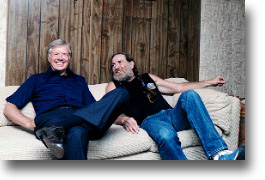 Mary Wharton’s biopic is in essence a nostalgic documentary about a time that might to some seem like the ‘good times’ compared to what is happening in the present. While Wharton’s film is a documentary, it follows a chronological narrative. Carter’s single term was sandwiched between Gerald Ford’s two and half year term after Richard Nixon resigned in disgrace and Ronald Reagan’s landslide victory. It was the Watergate crisis that opened the door for his election and the Iran hostage crisis that closed the door on his re-election.

The first part focuses on how a peanut farmer from Plains, Georgia became the president of the Unites States is arguably the most entertaining part of the film. Carter himself could neither sing nor play a musical instrument, so to call him a “rock ‘n’ roll president” is perhaps a stretch. However, Wharton’s subject did (and still does) have an immense passion for music that embrace all genres including good old rock ‘n roll.

The fact that he was able and willing to draw popular musicians like Willy Nelson, Greg Allman and Bob Dylan into his 1976 campaign certainly gave him a head-start on Jerry Brown to tried to counter Carter’s gambit by dragging in the Eagles and Linda Ronstadt into his own campaign.

I found that the film made me wistful for a time before globalization and the ‘race to the bottom’ and definitely before ‘making a country great’ meant screwing everybody else. 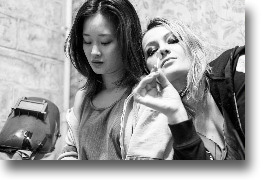 The Curse of Willow Song

I’ve never seen the city of Vancouver looking so gloomy as it does in Karen Lam’s new film The Curse of Willow Song. Filmed in glorious black and white on location in East Vancouver and Langley, Lam’s spooky drama gives the city a dark and hostile profile that is congruent with the storyline.

The story revolves around a young Asian woman that has been recently released from prison on parole. Willow (Valerie Tian) can’t catch a break. She isn’t allowed to have contact with her brother, a local gangster, the job she is given as part of social rehabilitation is cancelled and she is living in sketchy digs on Vancouver’s notorious Downtown Eastside. When she has her paycheque stolen, her life reaaly goes sideways. When she applies for the vacant position of a welder, the site manager (David Lewis) makes a clumsy pass at her. On top of all that, she is being stalked by a menacing adversary named Wolf (Adam Lolacher) who is trying to get even with Willow’s brother through hounding her.

Through the central character, the film deals with desolation and racism at varying levels of malignity. It’s hard to imagine who might want to sit through this film for 90 minutes. Though, the film does have one thing in its favour; a superbly nuanced performance by Vancouver actor Valerie Tian in the titular role. If you saw the film Juno a few years ago, you could hardly miss seeing her as Su-Chin. 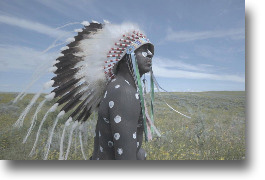 Michelle Latimer’s engaging quasi-documentary borrows part of its title from former vice-president Al Gore’s controversial film that also came with the warning that collective humanity has been heading in the wrong direction for a number of generations.

Cherokee writer Thomas King is the film’s off-screen narrator who occasionally shows up as a quirky voyeur retelling a piecemeal story about a vain coyote and an all too accommodating duck. The story is presented as a metaphor for the film’s general theme of juxtaposed cultures.

The film really begins with a re-enactment of the Battle of the Little Bighorn, commonly known as Custer's Last Stand. The engagement was an overwhelming victory for the Lakota, Northern Cheyenne, and Arapaho against the 7th Cavalry Regiment led by Colonel George Custer. The scene depicts as much as anything else in the film the cultural divide between aboriginal peoples and European settlers.

The filmmaker delves the many issues where indigenous lifestyle conflicts with the broader population both in Canada and the United States, though to her credit, she touches lightly on the issue residential schools. If you still don't grasp the point by the film's end, listen to “I’m not the Indian you had in mind” performed by Vancouver based First Nations hip hop duo, Snotty Nose Rez Kids and heard over the final credits.