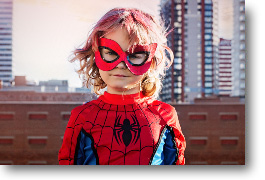 Kelly Wolfert’s feel-good documentary, and as its subtitle suggests, is the story of a real life superhero. The film, in fact, centres on Mable Tooke AKA SpiderMable. Wolfert’s film, and Mable’s story both start in Mable’s home town Edmonton, Alberta in 2015. Mable is an energetic, inquisitive and fun-loving six-year-old, but there is something that sets her apart from other kids her age – she has Leukemia and is undergoing chemotherapy. Mable also feels a strong connection to Spiderman, Stan Lee’s superhero creation with radio-active blood.

The local Children’s Wish Foundation has planned a very special “Wish Day” for Mable. An elaborately organized caper involving Mable masquerading as her alter-ego SpiderMaple is planned. Everyone from the city mayor to Chief of Police is fully committed to the ruse. Even the Alberta Premier at the time Rachel Notley and captain of the Edmonton Oilers hockey team Andrew Ference, get on board. The incident caught the public imagination to such an extent, that director Kelly Wolfert thought it a worthy subject for a short film.

Overwhelmed by all the goodwill this six-year-old received, she became determined to harness the public generosity and re-direct it towards other children who were cancer patients. She then became an ambassador for the Canadian Cancer Society and Kids with Cancer Society.

The remainder of Wolfert’s film then follows Mable’s exploits through her difficulties at school and meeting celebrities like Stan Lee and Canadian soccer star Christine Sinclair. It’s perhaps easy to understand why the filmmaker wanted to expand Mable’s story and indeed it is inspiring. Unfortunately, in the last twenty minutes, it tends to bend under its own weight. American filmmaker Kevin Smith’s humour and former CBC broadcaster Peter Mansbridge’s gravitas in Interview footage prevent the film from descending into tedium.

Neither Mable, nor her parents Lisa and Neil Tooke likely see her as a superhero – she’s a little girl who could – and did!