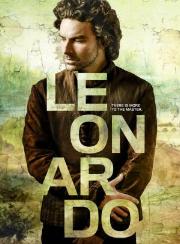 The series chronicles fifteenth century High Renaissance painter Leonardo da Vinci's life and career through the works that made him legendary, and some of the people that influenced his psyche. While the dialogue is in the English language, and most of the actors coming from Britain and Italy, it’s truly an international project with five countries involved in the production.

The first episode begins with Leonardo imprisoned, accused of the murder of his muse and occasional inamorata, Caterina de Cremona. From this setting, the narrative takes frequent flashbacks to sixteen years previously with Leonardo probably in his early twenties, living in Florence and under the mentorship of painter and sculptor Andrea del Verrocchio. It is there that he first meets Caterina who are immediately drawn to each, though for different reasons.

In the second episode, Verrocchio reluctantly discharges Leonardo from his apprenticeship after his arrest on suspicion of sodomy. We begin to see Leonardo’s obsession with perfection and uncompromising in his vision. He receives two commissions: one from the Church for The Adoration of the Magi and one for a portrait of the Florentine aristocrat Ginevra de' Benci. Because of the subject’s father’s dissatisfaction with the likeness he refuses payment (as a footnote, the portrait now hangs in the National Gallery of Art in Washington, D.C. purchased for US$5 million).

Aidan Turner is appropriately brooding as Leonardo, though hardly helped by the modern dialogue he has to deliver. Veteran actor Giancarlo Giannini is rock solid as Verrocchio and it is interesting to see Freddie Highmore against type, taking a break from his weekly role as Dr. Shaun Murphy on The Good Doctor, playing twisted police investigator Giraldi. It’s a little ironic that the most impressive individual performance is delivered by the demure Matilda de Angelis who plays Caterina - one of the few fictional characters. I also enjoyed Poppy Gilbert’s energy in the role of Ginevra and amazed at her likeness to the original.

I look forward to seeing the remaining six episodes in the series.