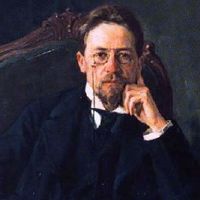 Adapted and Translated by Michael Frayn

When I muse about Chekhov and his plays, I immediately am reminded of that old English adage, and also the title of one of Shakespeare's more popular comedies, "Much Ado about Nothing". And that's what Chekhov is all about. People from all walks of life get together in a rural Russian town, talk and gossip a lot about politics and personal lives, joke about themselves, fall in love in different love triangles, are extremely bored, and then go away.

This play was written by Chekhov when he was in his twenties, and formed the basis of his other later plays which were more successful: The Seagull, Three Sisters,, Uncle Vanya, and Cherry Orchard. As I was watching this play, all the characters of his later plays were present: the school teacher, the doctor, commedia dell'arte stock characters, as this was the basis of many playwrights including Shakespeare, who wrote their comedies after being influenced by these Italian travelling troupes performing from town to town.

In the commedia, there are the lovers, then the old men who are either old university professors, braggart sea captains, or army generals, the arlequino, or in Calderon and Lope de Vega, the gracioso, who are usually the servants who play the comic relief and are usually the main characters in these commedias.

This comedy was originally a 7-hour long manuscript entitled Platonov, (the central character of the play, the school teacher), but was cut down to 2-3 hours by English translator, playwright and novelist Michael Frayn, known popularly for his play Noises Off. He re-titled it Wild Honey, which debuted in London’s West End in 1984 starring Sir Ian McKellan, and 23 years later, in 2007, St. Petersburg's Maly Theatre who rejected the play when the manuscript was first presented by the playwright in the 1880s, toured with it around Europe to great success, despite its four-hour length.

The main characters in this play are typically Chekhovian, just as in his other more succesful plays later on, where the action takes place in a rural estate, in this case, the Voynitzev estate, in southern Russia. The owner, Anna Petrovna (Claire Hesselgrave) is a young widow who chases after Platonov. She lives with her stepson Sergey (Eric Freilich) and Sofya (Sarah Goodwill), his new wife.

Sofya has just returned for the summer, and her friends and neighbors have gathered for a welcoming party. As the hot summer progresses, with fireworks and other festivities, they all chat a lot, play cat and mouse games, and basically, do silly things just to pass the time and the ennui of a small town.

Anna Petrovna is being chased by Porfiry Semyonovich (Ryan Warden), who wants to marry her and she avoids him as well as her other rival, the sleepy-head retired Colonel Ivan Ivanovitch (Andrew Lynch). Then there's the doctor, Nicolai Ivanovitch (David Kaye) chasing Marya Yefimovna ( Christine Quintana). And apparently all the women are in love with Platonov (Ben Whipple), the brilliant young teacher who seduces them to relieve his boredom. Whipple plays Platonov quite like the cad that he is, and takes advantage of it because of his charisma and good looks.

All these brilliant actors played their parts quite well, but I felt Quintana as Marya, stood out as the best performer in this ensemble acting of BFA Theatre students. .

In the programme notes, MFA candidate Brian Cochrane, who directs this piece as his MFA Thesis, says: "What attracted me to Wild Honey was the abundance of opportunities for our department to show off ...a fabulous showcase for actors and designers... As a director it is a tremendous challenge, by far the largest scale of play I've ever attempted".