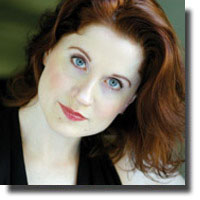 A Century of Broadway 2

Part Two of Jeff Tyzik's amazing tribute to Broadway focusing on music from Guys and Dolls, Music Man, Les Misèrables, My Fair Lady, Phantom of the Opera, and many more Broadway favourites brought the audience to their feet with "bravos" and "encores". Obligingly, Tyzik and vocalists Noll and LaBrecque sang their encore number with another duet from Phantom of the Opera.

The songs came in chronological order. The first was Gershwin's "Swanee" originally sung by Al Jolson in 1919. Tyzik told the audience how he saw the original Jolson clips on YouTube, and how he was going to reproduce it exactly the way it was. LaBrecque.came out with gloves (minus the Al Jolson make-up simulating a black man), but he sang and did the Jolson moves to a T.

Following this was a challenge both vocalists made. They asked the audience" "Why can't a man sing songs popularized by women vocalists and vice versa?" And so, what followed next were sung this way. Noll sang Frank Loesser's "Luck Be A Lady Tonight" popularized by Frank Sinatra in Guys And Dolls. Then LaBrecque followed with Frederick Loewe's (Arr. Johnny Green) " I Could Have Danced All Night" from My Fair Lady, and Barbra Streisand's "People". Afterwards, a medley from John Kander's (Arr. Barker) Cabaret with the title song sung by LaBrecque and "Money" by Noll. Then the impressive "If I were a Rich Man" from Fiddler on the Roof popularized by Zero Mostel by Noll.

On the more serious note, there were two very touching songs, and I was moved by the way Noll sang Sondheim's "Send in the Clowns". Likewise, the rendition of LaBrecque of Claude-Michel Schonberg's "Bring Him Home" from Les Miserables was also very moving.

Noll gave her all in Leiber & Stoller's (Arr. Tyzik) "I'm A Woman" with Tyzik doing a solo on his trumpet to the delight of the audience. Tyzik gave us some info on how Leiber and Stoller came up with a lot of great and popular songs such as "Smokey Joe's Café", "Stand By Me", and "On Broadway". These were sung with gusto by Noll and LaBrecque,

Then came the nostalgic Jersey Boys Medley with "Big Girls Don't Cry/Oh What A Night" sung exactly the way it was sung in the 50s. What fabulous and versatile singers these two are!

The show ended showing the operatic talent of Noll and LaBrtecque with Andrew Lloyd Webber's (Arr. Wayne Barker) "Music Of The Night" from Phantom Of The Opera. This was indeed impressive and the two came back for an encore singing the title song "Phantom Of The Opera".

It's always a treat when Tyzik comes to town, and he enjoys conducting the VSO which under Maestro Tovey has gained international renown. Looking forward to the three of you returning to Vancouver!