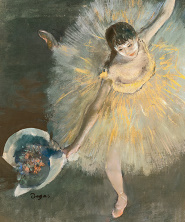 The Modern Woman: Drawings by Degas, Renoir and Toulouse-Lautrec

The Vancouver Art Gallery has succeeded in bringing together an exquisite collection of close to a hundred works by some of the most celebrated artists from the Belle Époque. As its title suggests, the exhibition’s prime focus is on that which is arguably the most popular of subjects in art – the female face and form. But this exhibition also reflects the undeniable evolution of women’s status in a modern world. It may sound odd to describe something that took place at the end of the nineteenth century as modern, but this era was certainly the bellwether of a shift in women’s independence and their newly sought position in society.

The Modern Woman is overseen by Isobelle Julia, conservateur général du patrimoine from the Musée d’Orsay. The exhibition is sub-divided into clearly identified salons that offer the visitor a unique portal of how Parisian women from various backgrounds have been depicted by France’s most celebrated impressionist artists.

The first group of pictures that greets the gallery visitor is in The Portrait salon where they will see such fine examples of Pierre-Auguste Renoir’s warm sensual style that has made his works so well-known. Renoir's drawings are notable for their vibrant light and exceptional use of vivid pastels. He is perhaps one of the few impressionist artists to come from a working class family. His first job was working in a porcelain factory painting designs on fine china. Other Renoir drawings may be found in the salon titled The Private Realm that shows his prowess with pen and ink.

In the Women at Work group examples of Henri de Toulouse-Lautrec’s bohemian style are on display. Lautrec is famous for capturing the spirit and emotion of the era in his iconic Moulin Rouge posters. His drawings in this exhibition are clearly indicative of the joie de vivre of the time.

Beyond the City offers a distinctively rural perspective of women with works by Camille Pissarro and Eugène Boudin. Pissarro’s watercolour and black crayon Harvesting Peas is worthy of an extended glance.

There are no less than nine works by Edgar Degas scattered throughout the exhibition; including The End of the Ababesque, an oil and pastel on canvas depicting a young dancer taking a bow at the end of a performance. This particular drawing has been used as the exhibition poster and will be seen all around Vancouver in the weeks ahead.

Degas is regarded as a superb draftsman; he shows a mastery of movement and his portraits are notable for their psychological complexity. Apostles of Degas will no doubt recall his painting Les Choristes being stolen while out on loan from the Musée d'Orsay on new year’s eve last year.