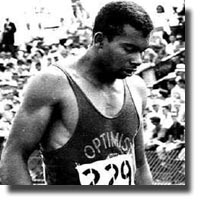 DOXA presented another brilliant documentary as part of their monthly series leading up to their May festival. The Richmond City Chambers proved to be an excellent venue, with 2 screens making it impossible to have a bad seat.

Mighty Jerome was the film of choice Thursday night. Chosen in part to celebrate Black History Month, Mighty Jerome is an 85-minute film that documents the running career of one of British Columbia’s, and Canada’s most successful sprinters.

Written and directed by Charles Officier and based on the book Running Uphill by Fil Fraser, the film is an incredibly beautiful mix of archival footage and photos, dramatic re-enactments, and interviews with many people close to Harry Jerome – his ex-wife, Wendy, his daughter, his former coaches, friends, and journalists.

Racing from 1960-1968, Jerome was the first person to ever simultaneously hold the world records for both the 100-yard dash, and the 100-metre dash. He over came a horrific injury - incurred at the 1962 British Empire Games in Perth, Australia – to silence his critics and once again stand on top of the podium.

The film does an excellent job of portraying the pressure Canadian athletes feel. Ridiculous expectations are placed on any Canadian athlete competing internationally with a hope for a medal, and if something goes wrong, the media is appallingly quick to criticize the efforts without trying to understand what may have happened. It is sad to know that, from that respect, little has changed for Canadian athletes.

The film is also subtly interwoven with threads of the struggles against racism that Jerome no doubt faced – although he said little about it. When Jerome was at the start line for his heats in the 1960 Olympics, he was one of a small number of black athletes competing at those Olympic Games. By his last Olympics, 1968 in Mexico, the colours of the start lines had changed significantly, but many black athletes were still fighting an uphill battle for equality.

The NFB has not yet secured all of the permissions to release this film, but if you have the opportunity to catch a screening of it, do! It’s an amazing piece of art about an incredible hero in Canadian sporting history who, arguably, is not nearly well-known as he ought to be.

After the film, DOXA invited up the producer, Selwyn Jacob, Dr Doug Clement to the front of the room, and contacted Charles Officier via Skype to answer questions about the film. It was fascinating to hear the different perspectives on the making of the film, and learn about how it all transpired.