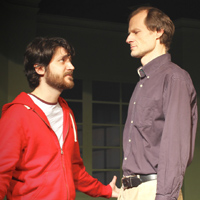 The Vagabond Players
Towards Zero by Agatha Christie

I enjoy these whodunnit thrillers, especially the Agatha Christie plays. And to boot, the Vagabond Players' cast did a great job delivering this play.

Naturally, it's always Agatha Christie who wins the best when you try to guess who the murderer is at the end of the play. No one hardly guesses right. It's never obvious, and that's why we call it a "mystery thriller".

The play opens when frail and elderly Lady Tressilian (Denise Brookson) invites several guests into her seaside home at Gull's Point. In the matinee performance I attended last February 5th, Brookson had to read from the script because the original cast member, Diane Tzingounakis, was indisposed. She did a good job playing the part despite the fact that she read her lines.

When tennis star, Neville Strange (Robson Baker), brings his new wife Kay (Madelein Halbauer) along, knowing that his ex-wife Audrey (Alexandra Wilson) is also present, events take a sinister turn when Lady Tressilian is killed. Superintendent Battle (Peter Robbins), who is holidaying nearby, finds himself embroiled in a labyrinthine maze of clues and deception.

There was some comic relief at the end when Neville is being chased onstage and boxed in the face. But this isn't an action play, so we can forego this incident which got a few giggles from the audience. But all in all, the play was well directed by Miles Lavkulich who has been with Vagabond Players for several years. Kudos also to Dwayne Campbell for the set design, as well as other members of the production staff for an entertaining show.