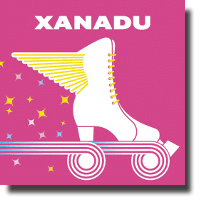 This summer, love is a roller-skating disco called Xanadu, and Canada loves Xanadu. There are many reasons to recommend this over-the-top theatrical send-up of the 1980s cult movie. I will start with the intriguing story, move on to the stellar cast and then finish with the impressive production crew.

Douglas Carter Beane’s stage adaptation of Xanadu is a boy meets goddess love story that blends Greek mythology with a disco-pop music world in a fun-filled, feel-good fantasy. By turns witty and winsome, this script follows the goddess Clio as she assumes human form to play the muse and inspire Sonny, a suicidal artist who meets Danny, a business tycoon. Danny ends up as his mentor and business partner. Among the madcap shenanigans the audience are treated to along the journey, Zeus and the goddesses and mythological creatures of Olympus make special appearances, and hilarity ensues.

Marlie Collins sparkles, shimmers and sizzles in her lead role as Kira. Ms. Collins is one of the best singers to grace an Arts Club stage. You may laugh at her caricature of an Aussie accent, but you’re sure to be dazzled by her roller-skating finesse, and favourably impressed with her luminous renditions of classic John Farrar tunes such as Suddenly, Suspended in Time, or Have You Never Been Mellow. She does a wonderful job of her part in the hilariously memorable ensemble rendition of Have You Never Been Mellow, delivered with robust jocularity at Zeus’s throne-room upon Olympus.

The Jeff Lynne Electric Light Orchestra numbers are also impressively rendered by the band and the singers alike: particularly Evil Woman, Strange Magic, All Over the World, and of course the titular pop favourite, Xanadu.

Bonnie Panych, smitten with mellifluous malice, delves deeply into the diabolical and comes up with many memorable renditions of tongue-in-cheek melodies, betraying her goddess sister Clio (Kira) out of vengeful spite in a role that she obviously takes great relish in performing. Her rough and ready Strange Magic proves that ambition need not ascend the uppermost step of the ladder to realize its lofty aims.

Gaelan Beatty puts his heart and soul into his debut Arts Club performance of Sonny. His skating is stellar, his singing is spot-on, and his energetic performance is, on the whole, an admirable example of the ample talent that comes out of Studio 58. The chemistry between the two leads is perhaps a tad bit underdeveloped, and more could have been made of the build-up to that smoldering kiss. However, in the final analysis, this is a romantic spoof, not a sensual melodrama. Gaelan has pop icon written all over him.

J. Cameron Barnett and Vincent Tong merit special mention in their supporting roles as Terpsicore and Thalia, respectively. Barnett especially is a stand out, full of robust and unstoppable energy. He gives a stellar performance in this musical.

Simon Webb is suitably brusque as the jaded businessman Danny. Then he is imperiously brusque as the player-god Zeus. It is interesting to watch the nostalgic effect seeing Kira has on Danny. Webb does an admirable job of appearing transfixed and transformed by this encounter.

Webb`s response could be seen as a symbolic persona, a kind of objective correlative, of the ideal audience. All jokes about the arts aside (and there are more than a few in this play), nostalgia is one lasting effect that this script, all these impressive performances, and this entire memorable production is sure to have upon its audience. We, too, are transfixed and transported back to those mirror ball days.

Kevin McAllister’s scenery is a rare blend of retro and art deco. Rebekka Sorensen’s costumes are a colourful throw-back to Eighties pop-glam, with nice flourishes here and there, including the rock-jump-suits and Greek goddess attire that envelope the actors in ways that both dazzle and allure. Lisa Stevens deserves kudos for her amazing choreography, both on and off roller-skates. Finally, Dean Paul Gibson and the rest of this production’s creative team merit high praise for putting together a show that, despite all its disparate elements, contains such a high degree of unity and dynamic cohesion.

You will not want to miss this production of Xanadu if you are prone to the nostalgic effects of the early 1980s, because as those in the audience know, the mirror is not the only thing having a ball.