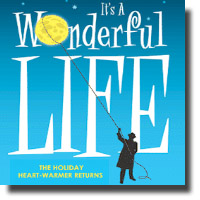 It’s A Wonderful Life was a bell ringing success. The November 29th performance was fantastic. The audience gave the cast and crew a well deserved standing ovation. It was good to see the crew on stage as well as the cast when taking a bow. So often they don’t get the recognition that they deserve.

The curtain opens. It is snowing and standing there is George Bailey next to the railing of a bridge. He sees no way out, but before he is able to jump off the bridge his guardian angel Clarence (without wings) comes to help him. His life soon passes before him. What would his small town of Bedford Falls be like if he were never born?

Throughout the entire performance the audience barely moved in their seats. They were glued to the stage. Director Dean Paul Gibson did an incredible job. This holiday classic was happy, sad, funny and nostalgic. Of course there is the old familiar favourite line: "Every time a bell rings an angel gets his wings." It is difficult to produce this play with its many location changes, however the original black and white movie starring James Stewart was cleverly used on a large screen in the background. It was wonderfully synchronized.

Throughput the entire performance, Clarence the guardian angel keeps us smiling because he keeps going on and on about when he will get his angel wings. Both Clarence and Mr. Potter (the snarling old banker) are strong rolls and so opposite in character that they are a driving force to the story.

Going down to Granville Island to see this play is a tremendous way to start this Christmas season. The play is so much about character, good friends and a supportive family. I love the way this story ended. I guess you will have to go down and find out then. Don’t hate me, but I hope it snows at Christmas this year.