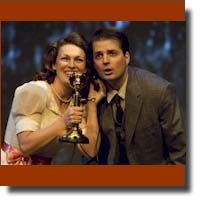 What a wonderful show! A timeless classic, indeed! In fact, I think this show should be presented every Christmas the same way the Capra film is shown on TV during this joyous season. Most of the actors who came out last year are the same actors who are in this season. I didn't see the show last year, but I assume the staging is the same. I liked Gibson's mise-en-scene: the juxtaposition of the Capra film with stage actors, almost four-dimensional as the actors play their parts all around the theatre: coming from behind, acting on the aisles, and on the orchestra pit area. You get that feeling of intimacy that you don't experience when watching a play acted only on a proscenium stage.

I must say the star of the show was the angel, Clarence. Veteran actor Bernard Cuffling stole the show, and he even got applauses after almost every punch line he said. In fact, at curtain call, he got the most applause and cheers. A teary-eyed moment at the end of the second act was when 9-year old Zuzu (Leigh Bourque) said: “Every time a bell rings an angel gets his wings.”

George Bailey (Todd Talbot) performed energetically as the iconic everyman hero. This role is truly a challenging one: he runs, he shouts, he enters and exits all the time, and goes into different emotional states. Wow! Doing that every night can just drain you. Although he doesn't have that innocent charisma of Jimmy Stewart, Talbot performs his part admirably. His wife Mary (Jennifer Lines) also played her part splendidly, but there were moments I felt she didn't have the feminine grace of Capra's Donna Reed. The villainous Henry Potter was excellently portrayed by Kevin McNulty, and the other actors, many of whom played multiple roles, supported the main characters with assurance.

The costumes were indeed period. I remember my uncles and aunts wearing those clothes in the late forties and early fifties. The set design was a bit tricky because of the short scenes and quick set changes. But the timing was good; there weren't delays in the transitions and they went well with the pace of the play. Videographer Jamie Nesbitt did a tremendous task in editing the Capra film and merging celluloid with live action.

The play is timely in that we're passing through a period of financial crisis, and the topic of people losing their homes through foreclosures was one of the main sub-themes in this play. The audience was snickering at references of bailouts, so much so the topic in today's headlines.The film/play was definitely influenced by Dickens' Scrooge, another timeless classic performed and adapted on stage and repeated every Christmas season with different film interpretations of the story.

It might be interesting to do this show again next season but with a different interpretation so that those who have seen it this year would experience something new and refreshing next Christmas season.