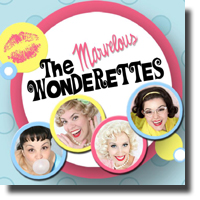 Hey Look! It's a Co-op
The Marvelous Wonderettes by Roger Bean

The Marvelous Wonderettes (shouldn’t be the Wonderful Marvelettes, or did a 1960s Motown female vocal group bag the name first?) is a fully-fledged two act play that is both a nostalgia revue and jukebox musical that pays homage to every sixties girl group that ever recorded a note.

Under the guise of the 1958 senior prom night at Springfield High School, four girls who are among the graduates come to the gymnasium stage in colourful dresses and crinoline skirts to provide the evening entertainment. The girls might all be the same age, but are recognizable by their individual style and persona: Cindy Lou Huffington (Lalainia Lindbjerg – will I ever be able to pronounce her name) is the trouble-maker of the group who enjoys spotlight and other girl’s boyfriends; Betty Jean Reynolds (Meghan Anderssen) is the madcap comedian of the group. She and Cindy Lou are both best friends and fierce rivals; Missy Miller (Jennie Neumann) is the bespectacled over-achiever and peace-maker of the group and Suzy Simpson (Dianna Kaarina) is the gum-chewing (even when she sings), popular, happy-go-lucky personality of the group who finds fun in everything she does.

Classic pop songs like Mr Sandman, Lollipop, Teacher's Pet and It’s My Party are delivered with near- impeccable three and four part harmony. The girls each get a chance to perform a solo and dedicate it to a past, current or future boyfriend. Betty Jean’s rendition of the Connie Francis hit Lipstick on your Collar and Suzy’s Stupid Cupid are hilarious.

I’m not sure that the audience participation factor works as well as the rest of the show. One young fellow who was dragged up on stage and used as a character in the story looked and acted awkward and just a little embarrassed.
The second act fast forwards to 1968 for the ten year reunion. Crinoline skirts give way to miniskirts, the heavily lacquered hairstyles give way to a more natural look and retro vocal microphones are replaced with the cordless hand held type. It’s in this section of the show that we get to learn about each of the girl’s problems, fears, rivalries, and of course loves.

Cindy Lou returns sporting a biker’s leather jacket which provides for an excuse to cover Son of a Preacher Man and Leader of the Pack. Suzy returns sporting highly visible signs of advanced pregnancy without being absolutely sure of her husband’s total commitment. Suzy overcomes her emotional anxieties and physical predicament to perform an amazing version of the Otis Redding original R-E-S-P-E-C-T.

The Wonderful Marvelettes – oops! - Marvelous Wonderettes (both the show and the performers) never take themselves too seriously; their prime goal is simply to entertain, and these gals do it wonderfully –er, marvellously well.