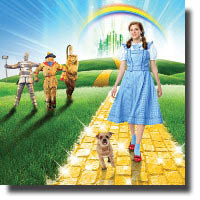 The Wizard of Oz

What an enchanting adaptation of this iconic classic! Andrew Lloyd Webber reconceived this musical for the stage and this new production contains all the beloved songs from the Oscar-winning film score, all the favorite characters, plus new songs by Tim Rice and Andrew Lloyd Webber.

The acting was fabulous. There was a standing ovation at curtain call for all the cast members, especially for Danelle Wade who played Dorothy. Although she's no Judy Garland, still she delivered with the innocence of childhood which she played to the T. Her emotional "Over the Rainbow" touched the hearts of many of us in the audience.

But the other actors were likewise excellent. Cedric Smith in the title role of The Wizard was superb. He reminded me of those Shakesperean actors of yore--Edmund Kean, Laurence Olivier, and other top notch thespians. Scarecrow (Jamie McKnight), Lion (Lee MacDougall) and Tin Man (Mike Jackson) were equally marvelous in their acting.

In my interview with Mike Jackson (read interview below), he mentions how three generations of a family come to see the show. Well, I was one of those families -- my daughter and granddaughter were with me and my wife to see the show on opening night. And we all enjoyed it.

But I was impressed most of all at the acting prowess of Jacquelyn Piro Donovan who played the Wicked Witch of the West. What a splendid actress!

Also impressive were the set, costumes and all the technical effects that went into the production. What a spectacle! The use of the scrim that then becomes a screen showing the tornado as it lifts the house of Dorothy and enters the eye--better than the movie. The Munchkins and the Emerald City citizens dressed in colourful costumes, and of course the soldiers of the Wicked Witch of the West in red warrior costumes doing acrobatics. Wow! What a show!

This is perhaps the most sophisticated musical theatre production of Wizard of Oz that's ever been presented through the decades, and I tip my hat to Broadway Across Canada for bringing this wonderful production of Andrew Lloyd Webber to Vancouver. Be sure not to miss it.

Mike will be playing the role of the Tin Man in the upcoming Broadway Across Canada production of Wizard of Oz at the Queen Elizabeth Theatre in Vancouver November 5-10. I sent him an email asking him a few questions about himself and how he felt about the role he'll be playing. Here are his answers:

Could you give me a brief bio of your career as an actor: Did you train in Vancouver? What were your first major roles (in Vancouver or otherwise)? When did you start professionally?

I grew up in North Delta and moved into Vancouver in my early twenties. I trained at Harbour Dance Centre under Belinda Sobie, Pam Rosa, and Danielle Clifford. Those ladies taught me everything. My first major show was WEST SIDE STORY at T.U.T.S in 1988 for which I had the honour of receiving the Grace MacDonald Award for 'most promising dancer'. I was able to start working professionally soon after that and was off to PEI to perform in ANNE OF GREEN GABLES at the Charlottetown Festival.

Are you having fun with your part as the Tin Man?

It's a blast. Playing the TinMan is an incredible honour. It's intimidating taking on such iconic roles and when people ask about what is the best part, I always answer that hearing little kids in the audience cooing and laughing and seeing them dressed up like their favourite characters is amazing.

What are your future projects?

Well, I'm with this tour for awhile. As life sometimes comes full circle, I now have the honour of being the choreographer for ANNE OF GREEN GABLES in Charlottetown. So for the last few years I have gone out there to reset the show. I'm hoping to do the same this summer.

Anything else you want to add?

You know, often during the bows at the end, we see 3 generations of a family who have come to see the show. It's pretty amazing to be apart of something that has meant so much to so many generations. For me, to be doing the show in Vancouver where I grew up and in the city that means so much to me, personally, fills me with a lot of pride.