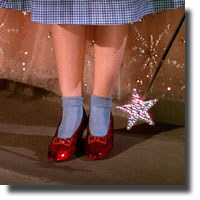 When L. Frank Baum wrote his children’s fantasy novel The Wonderful Wizard of Oz back in 1900, he couldn’t have guessed that this quintessential coming-of-age story would become an icon of popular culture. Aside from prequels and sequels, it has spawned numerous adaptations, including the 1987 Royal Shakespeare Company stage version that this mounting is transcribed from.

There was probably no one attending Friday night’s opening of Gateway Theatre’s production of The Wizard of Oz that didn’t already know Dorothy’s story. How an orphan living on a farm in Kansas, seeks refuge in the farm house moments before being swept up in a violent tornado, and crash lands in Munchkinland in the Land of Oz. After meeting up with some pretty unconventional characters who inhabit either side of the good n’ evil divide, she ultimately discovers “there’s no place like home.”

The show features all those hummable songs by Arlen and Harburg: "If I Only Had a Brain," "We're Off to See the Wizard," and "Hail, Hail, the Witch is Dead" are just a few of the trademark songs that have made it into mainstream culture.

With around two dozen performers, giving their all, some even covering multiple roles, identifying individual stand-out performances is difficult. Although personally, I really enjoyed the delightfully underplayed dual readings by Jill Raymond as Aunt Em and Glinda (the Good Witch), the latter role being a perfect foil for the outrageously camp performance of Tara Travis as the Wicked Witch of the West.

Bridget Esler was a safe choice as the wholesome, wide-eyed Dorothy. On stage for the entire two-hour show, she delivered throughout. Her solo singing of "Over the Rainbow” may have lacked some authority, but the young Ms Esler had little difficulty with the ensemble vocal work. She doesn’t even get upstaged by a charming, scene-stealing Toto, a role shared by a real dog with the unlikely name of Henry Emerson and a ‘look-alike’ hand puppet.

Carmen Alatorre’s colourful costumes infuse principal ideas into the characters and bring a level of quality to the production. Lauchlin Johnston’s Kansas homestead and rolling sets of the Oz landscape are low budget, but allow the performers greater mobility.

Aided by a hard-working young cast, Barbara Tomasic has pulled together a brash and high-spirited production. So take a break from Christmas shopping and take the family on an adventure down the “Yellow Brick Road” – they’re sure to love it.