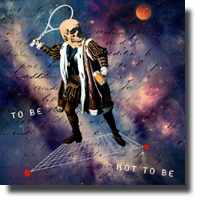 Pacific Theatre’s creative team rarely fails to entertain audiences looking for depth and humour in a performance, and this staged reading of Wittenberg is no different. David Davalos’s Wittenberg is set in the early 16th century and features the story of what an academic relationship between Dr Faustus, Martin Luther, and Shakespeare’s young Hamlet might look like if their lives were intertwined.

The German University of Wittenberg was where Martin Luther taught theology around the same time when Dr Faustus was imagined to have been living in the same city. Hamlet was also said to have studied in Wittenberg prior to his father’s murder. Davalos’s script plays on several deeply spiritual themes that Director Stephen Drover executes well with fast-paced dialogue. Everything from the seven deadly sins to the argument of faith verses reason and damnation verses salvation is featured in this 2-hour performance. Rarely does an audience get such fun, witty dialogue and a legimate cerebral work-out.

The audience is presented with two counterpoints in Dr Faustus and Martin Luther, with the young Hamlet playing a perfect mediator. Anthony F. Ingram as Dr Faustus is dazzling, he plays the perfect professor and psychiatrist devoted of reason and the indulgence of earthly desires. His presence is powerful on stage and Ingram really captures this philosophical and hedonistic character, while keeping the audience simultaneously thoughtful and laughing.

Marcus Youssef is also a strong performance as Martin Luther, playing off Ingram’s Faustus with a more serious, spiritual role, imploring Faustus to repent while grappling with his own faith. Mack Gordon as Hamlet may have been the only actor that reminded me this was a staged reading for which the actors had only two and a half days to prepare, but even with more frequent glances to the script in hand, Gordon plays a naïve academic student struggling with his belief in fate and in God (as well as his tennis game).

Finally, Shauna Johannesen appears throughout the play as the "Eternal Feminine," a representation of the frail and seemingly easily corruptible “generic female”, as this century would have likely viewed their women. Johannesen plays the female well as a two-dimensional “idea of a woman” but there is no depth or thoughtfulness to this role; perhaps because Ingram and Youssef really do steal the show with their much more intriguing character studies and performances.

In the end, I felt this performance has it all – great script, fantastic acting, depth of humour and thematical elements, but most importantly it expects much from the audience. Wittenberg captures us on several different levels – the more background you have, the more you can appreciate the depth of this play’s dialogue and central themes and many references. Not a play to be missed, even if you don’t consider yourself an expert on 16th century theology.

If you have never experienced a stage reading of a play before, you might be inclined to lower your expectations. An actor getting into character whilst carrying and reading from a script might seem a challenge for a spectator when it comes to suspending disbelief. However, this was not the case at all.