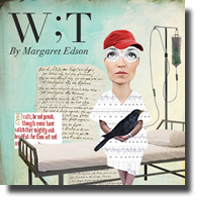 “How are you feeling today?” are the first words heard from Vivian Bearing, exquisitely played by Katharine Venour. It’s a rhetorical question directed at the audience, uttered alone on stage dressed in degrading hospital garb and a red ball cap atop a shaved head. It’s a question that she gets asked routinely by anonymous hospital attendants and medical staff who should anticipate the answer from a patient with stage four ovarian cancer.

American playwright Margaret Edson’s Wit is a touching play informed by the wry and profound asides of the protagonist. Her only human contact is a compassionate nurse, her former mentor - and the audience. She deals with her intense suffering through her own cynical humour and John Donne's abstract poetry. (John Donne was a Church of England cleric and poet, famed for his sensual style. His works include sonnets, love poems, religious poems and Latin translations). She is then viewed in abstract terms by a doctor who observes life and death as an opportunity for research and an intern who is unable to connect with patients beyond superficiality.

The play chronicles the final hours of fiftyish and single, English literature professor Dr Vivian Bearing as she reflects upon her condition while recalling John Donne's Holy Sonnet X, "Death Be Not Proud.” One might assume that a play with such a serious premise and central character with an obsession with Donne's labyrinthine prose would not offer much in the way of humour – that assumption would be misguided!

Vivian is not heroic, nor does she have the benefit of faith. So, she relies on her own intellect and mental strength to get her through these tough times. She uses her “wit” to both test unsympathetic hospital staff and to allow the audience to share her struggle.

Venour’s quiet intensity and smartness make her an obvious choice for the role of Vivian who sees her vulnerability as an outlet for self-mockery. The role is nonetheless demanding, and Venour is responsible for delivering around eighty percent of the play’s dialogue.

Among the supporting roles Dan Amos is convincing as Dr. Jason Posner who places research ahead of humanity. Julie Casselman stands out as Nurse Susie who believes the opposite. Ron Reed turns in appropriately detached performances as Vivian’s perspicuous Oncologist and her distant father.

Kudos to Angela Konrad’s fluid direction. She manages to maintain the present-to-past, back-to-present scenes from being byzantine.