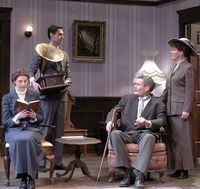 .What a wonderful production! This is perhaps one of the best productions presented by Metro ever since I started reviewing their plays 15 years ago. Director Johnny Duncan did an excellent job, and so did the actors. Most of them were in the Vagabond Players' production last year, and I could see how the acting came so natural to these talented actors who performed incredibly well.

In the director's notes, Duncan expressed his pleasure in directing this classic period play by one of the most important English dramatists of the 20th century, saying that this "endearing play is like a freash breath of Spring as it moves along without any profanities, violence or sexual overtones. It is about family life in a different time; a family that remains close together as it fights adversity"."Let right be done" is the underlying theme of this play which was inspired by an actual event setting a legal precedent in the case of Stonyhurst College alumnus George Archer-Shee, a cadet at Osborne in 1908.dismissed for stealing a five shilling postal note.

As I said, the acting was superb. Gavin LeClaire (Sir Robert Morton) fit the role of the defense lawyer perfectly well; the actual father and son team Arthur Winslow (Michael Jones) and Ronnie Wilson (Adrian Jones) acted as though they were in their own home; Alison Main-Tourneur (Violet) as the family maid was clear and crisp in the delivery of her lines. I also understood every single word uttered by Grace (Isabel Mendenhall), Arthur's wife. and their daughter Catherine (Gina Raye Young), an ardent suffragette, played her part flawlessly. Her brother Dickie Winslow (Kris Michaleski) was a bit stiff in his acting at the start, but warmed up later on. John Watherstone (Chris O'Connor) played his part well, acting nervous, showing his guilt, especially when it appeared that he was marrying for money. Roger Kettyls as Desmond Curry, Catherine's jilted suitor, acted his part to the T. His voice was resonant, and understably because he is a professional broadcaster.. Iris Gittens as Miss Barnes, a reporter, was likewise clear and crisp in her diction.

The play was a bit long, two and a half hours long including intermission, but the audience didn't mind this at all because of the superb acting, beautiful set design, and elegant costumes. Kudos to the production team, especially to Elizabeth Elwood for her exquisite set design, Tracy-Lynn Chernaske for her fabulous set, and to costume designers Cynthia Chow and Sean Ullman for the beautiful period costumes. This is a must-see production, and it runs until April 20th. Be sure you get up and go as this is a production not to be missed.