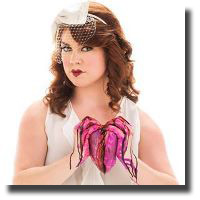 
We found the Little Mountain Gallery theatre behind a seedy storefront door just half a block west of Main Street at East 26th .  The neighbourhood has character and so does the theatre.  Wide Awake Hearts is a puzzling name for this play, but it is smart and sophisticated, and the dialogue is swift and mostly sure—although we left wondering what it was all that sure about.

The characters take the letters A, B, C, and D as signifiers, as if there was some kind of quadratic equation behind the emotional angst that forms the backdrop of this quirky play.  There is A: a writer/film-maker (Sean Harris Oliver) and B: his wife (Genevieve Fleming), who is cast in the lead role opposite C: his best friend (Robert Salvador).  Right from the opening kiss it seems as if this illicit couple are playing at a lot more than a part, but it is never quite clear whether they have been thrust together by the film-maker or by their own design.  How much of destiny is self-determination?

Later in the play the film-maker hires D: a new film editor (Claire Hesselgrave) because the old one wasn’t emotionally involved enough with the project; she complicates things even more by being in a long-term relationship with the male lead, who may or may not be in love with the film-maker’s wife.  This has all the makings of a muddled love quadrangle.  The flashes of genius are made all that much more intense and gratifying by the fact that the actors do such a good job of acting as actors.

The media package touts this as a play where “reality and fiction blur in hilarious and heartbreaking ways,” and there are a good many laughs in it; but in terms of heartbreak, it would be perhaps more gripping if it didn’t all seem so contrived.  Most of the characters reactions or responses seem carefully scripted.  The actors do very good jobs of acting like actors, but reality never makes an appearance.  If making this distinction was director Brian Cochrane’s point, then he’s made it.

Each actor has a dramatic monologue, and the two that stand out as being most emotionally intense are Robert Salvador’s confessional and Claire Hesselgrave’s professional self-portrait.  There is much intellectual physicality here to recommend, but these two monologues alone are worth the price of admission.