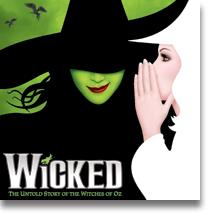 WICKED plus an interview with cast member Lee Slobotkin

What a spectacle! A dragon flying atop the theatre exhaling smoke and fire. Flying monkeys all over the stage. The Wizard's contraption machine as he scares everyone around. Costumes of all kinds superceding the costume design of the last production of Broadway Across Canada's Wizard of Oz. Elphaba, The Wicked Witch of the West (Laurel Harris) singing "Defying Gravity" from her heart . Glinda the Good (Kara Lindsay) the dumb blonde witch with her flawless coloratura. Indeed, what a show!

All these are vivid reimaginings in Holzman's interpretation of the classic The Wizard of Oz where the untold stories of Oz’s characters, the Wicked Witch of the West and her unlikely friend, Glinda the Good, are portrayed. The show follows green-skinned star Elphaba from birth to college and through the life-changing events which eventually label her “wicked,” and the spoiled rich girl Glinda, who falls for Fiyero (Matt Shingledecker) but who in turn is in love with Elphaba. The Wizard of Oz (Gene Weygandt) is depicted as a troubled man unlike the one in the original. Music by the Traveling Orchestra led by Jason Sherbundy was fantastic. I liked the part when Weygandt did a ragtime song and dance number, "A Sentimental Man".

Elphaba in Gregory Maguire's novel from which this musical is based portrays her as a passionate political animal activist fighting for the injustice to animals, especially her professor, Doctor Dillamond (John Hillner) who was fired because animals were no longer allowed to speak human and teach. She also fights for the freedom of the flying monkeys who are jailed by the Wizard.

The Ensemble who played various roles from Flying Monkeys to Muchkins to Citizens of Oz were fantastic in their acrobatic dances and choral singing. But of course to the good and bad witches, a stirring standing ovation and extended accolades were poured on this opening night of the return of Wicked to Vancouver.

Lee Slobotkin is part of the Broadway Across CanadaTM touring company that blew into town a week ago for a month run of WICKED at the Queen Elizabeth Theatre. Audiences will see and hear Lee in the role of Boq, a munchkin who gets caught up in a tangled triangle of unrequited love with two other characters. Wicked is an imaginative revisionist and darker version of Frank L. Baum’s The Wizard of Oz.

Lee spoke to me by telephone from an apartment he shares with fellow cast member Matt Shingledecker while the show is in town and he seemed genuinely excited about being in Vancouver. The good-natured Philadelphian, will celebrate his twenty-third birthday on June 29th – the same day that Wicked ends its run in Vancouver with two final performances.

“The role of Boq is a complex, yet important role in the stage production” he informed me. “You need to have some ability in dance, acting and be able to sing. And with eight performances a week every member of the cast has to maintain a high level of fitness.”

Just about a year ago, Lee completed a Bachelor of Fine Arts (BFA) degree program, majoring in musical theatre at the University of Cincinnati. But even while attending high school, he was performing regularly in community theatre. “Playing Seymour in The Little Shop of Horrors was a lot of fun” he recalled. “It was a chance to play a character role and the lead in the same show.” But his most physically demanding gig was the title role in Peter Pan which required a lot of aerial work hooked up to a harness.

When I asked him what it was that gave him the acting bug, his answer surprised me. “I caught the bug in summer camp and watching The Wizard of Oz on television with Judy Garland as Dorothy. I must have watched that movie dozens of times” he said with a chuckle in his voice. “Theatre is all I’ve ever wanted to do – there was never a Plan B and fortunately I have a very supportive family.”

Like many talented artists, Lee has a creative imagination. When I asked him if there were any roles that he would particularly want to do in the future, he picked one that doesn’t even exist yet. “Yeah, if there was biographical stage production or film about the late great Mickey Rooney, I would be first in line to audition for the lead.”

Eventually, the tour production of Wicked will come to an end, but right now Lee Slobotkin isn’t too concerned. “I’m too focused on my performance every night to be bothered about the future” he said. Before saying “Good-bye” Lee made me promise not to disclose any “spoilers.” He wants to be sure Vancouver audiences glean maximum enjoyment from seeing Wicked.