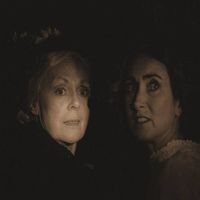 White Rock Players
Who Walks in the Dark by Tim Kelly

A cross between a suspense thriller and a spoof is this play based on Bram Stoker’s suspense novel The Jewel of Seven Stars, a follow up to Dracula. True enough, it is funny, especially with the comic relief provided by Suliman (Ryan J. Johnson), the thieving servant, his accomplice Tessie (Jane Mantle), and the bumbling constable Sgt. Daw (Bryce Mills). The other characters play their roles straight.

In this play, Archaeologist Sir Abel Trelawny (Ken Fynn) has upset The Nameless One’s plans for a return to the living by breaking into the tomb of an Evil Sorceress. She comes to London’s Karnak house (where the play is set) and creates murderous havoc for Sir Abel, his two daughters Margaret (Alexandra Wilson) and Judith (Krystle Hadlow) as well as his bewildered staff, Nurse Kennedy (Deborah Spitz), Mrs. Grant (Heather Harris), Dr. Winchester (David Lloyd Austin) and Christopher (Keaton Mazurek). Then, there's the climax of the play where Queen Tera (As Herself) shows up in her Egyptian costume of yore to be reincarnated.The mummy (Tessa Milne) who kept on coming in and out throughout added more tongue-in-cheek thrills and suspense to this show.

It surely is an entertaining show. During the matinee performance I attended last Sunday, we laughed at the way the jackal howled in the background. There was a funn yet scary scene where Suliman surprised Tessie who was trying to steal relics in a dimly lit stage. The crowd practically jumped out of their seats when Suliman entered.

In the message of Dave Baron, President of White Rock Players, heesaid that this season will be just for fun because according to audience surveys, people asked for more comedies. Baron also stated that ticket sales and raffles plus the food concessions are the only major source of income for the company. He goes around selling raffle tickets at the start of the show and during intermission for all of the plays. Kudos to Director Paul Kloegman, the cast and the crew for an afternoon of entertainment..