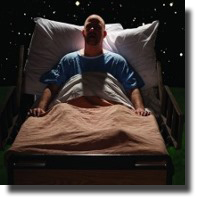 Realwheels Theatre
Whose Life Is It Anyway?

Brian Clark’s issue play, though first written four decades ago, is perhaps even more relevant today; the ‘issue’ being the “Right-to-Die” (institutionalized voluntary euthanasia). This Realwheels Theatre mounting has been updated to provide recent references to British woman Diane Pretty and Superman actor Christopher Reeve. Ms Pretty endured motor neurone disease before challenging the law to allow her a dignified death, and Reeve became a real-life hero, when becoming a quadriplegic after an equestrian competition, then for the rest of his life lobbying on behalf of people with spinal-cord injuries.

Whose Life Is It Anyway? is one of only a handful of plays that offer versions with a male lead and a female lead. This production has Bob Frazer as Ken Harrison, a sculptor at the zenith of his career, who has been left with a severed spinal cord as a result of a car accident.

Outwardly buoyant, he is nonetheless devastated by the loss of control of his own life. The medical staff senses that his ready sarcasm is a foil that masks his depression. He refuses to accept medication that will alter his mood and comes to the decision that he cannot live in a state of total dependency on hospital care.

The playwright blatantly manipulates the audience towards his own personal thinking, which is clearly on the side of individual freedom. Ken Harrison, through carefully constructed dialogue, puts forward a powerful argument advocating a patient’s choice, while the senior consultant (Michael Kopsa) through his convictions of preserving life, comes across as being obstinate.

Bob Frazer delivers a tour-de-force portrayal of the cranky quadriplegic with a deft mix of playfulness and pathos. He spends the entire two hours (plus the interval) virtually motionless in a hospital bed. He was so convincing that I felt like stepping onto the stage during intermission to cheer him up.

Frazer is supported by a group of fine local actors. Patti Allan gives a stellar interpretation of the veteran nurse with a brittle sense of humour and dedication to duty. Jennifer Lines brings sensitivity and emotion to the role of Dr. Scott, although we could have done without the dinner-date scene with Harrison’s lawyer (Jeffrey Renn). The usually solid Dawn Petten could hardly be blamed for the play’s only weak character, the stereotypical social worker Margaret Boyle.

I found myself being simultaneously entertained and challenged by the play. However, I would have preferred a more even-handed “freedom versus ethics” debate.