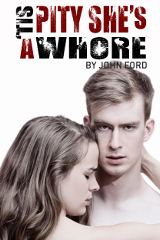 A complex tragedy by this 17th century playwright set in Italy and excellently delivered in the round. The cast was flawless in the delivery of their lines, and the early 20th century costumes by Kiara Lawson were to the T, as the setting was brought to this later period. The Elizabethan English was conserved, but lines were not stilted and in fact, delivered almost as though it was natural and real for the actors. Hats off to director and language coach Brian Parkinson.

Before the play started, Artistic Director Tariq Leslie who also plays the Spaniard Vasquez in this play had a few words to say about the success of ETC since its inception in 2012. An added grant from the City of Vancouver was added to the funding of this year's summer repertoire.

The play's treatment of the subject of incest made it one of the most controversial works in English literature. It wasn't included in collected editions of Ford's plays; or more often, its title had been changed. to something more euphemistic such as Giovanni and Annabella or 'Tis Pity or The Brother and Sister. The play has also been compared to Romeo and Juliet, and I could see that Ford was influenced by the Shakesperean play which was written 40 years before Tis a Pity.

There are moral flaws in the play. Giovanni (Wallace) is portrayed as a virtuous character when in fact he's the villain for seducing his sister. The title also is quite controversial Annabella (Morritt) is a victim, so why call her a whore? This could well be a success as a soap opera if produced today with its themes of passion, deception, intrigue and revenge.