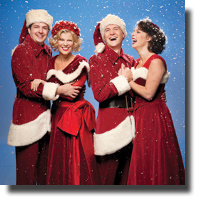 Christmas in Vancouver is a time of twinkling lights, bustling shoppers, eggnog latte’s and trips to the mountain. Despite dreary skies and inconvenient rainfalls, the city celebrates, reveling in the sights and sounds of the season. On Wednesday evening I joined the trend by attending what has become a well-loved staple of the Vancouver Christmas theatre scene, White Christmas: The Musical.

True to the 1954 film starring Bing Crosby and Danny Kaye, the onstage production of this Christmas classic features corny dialogue, a predictable plot, and unassuming songs from the Irving Berlin collection. Yet the story and score have an endearing and timeless quality, which is well preserved by the actors of the Arts Club Company. In addition to the cast and highly talented six person orchestra, a small crew bring the play to life through creative light, set, and costume design in keeping with the play’s era.

The opening scene has the audience stepping into the role of WWII soldiers in the 151st Division. Bob Wallace and Phil Davis (Jeffrey Victor and Todd Talbot respectively) greet the troops with a rousing performance of Happy Holidays and White Christmas, before being unhappily interrupted by the news of their beloved General (Allan Gray) being relieved of duty. The story picks up in 1954 as a successful Wallace and Davis audition the lovely Haynes sisters (Sara-Jeanne Hosie and Monique Lund) as a potential act in their show. Amidst budding and tumultuous romantic entanglements, the remainder of the play follows this quartet in their efforts to pull off a last minute Christmas show in Vermont.

The first act, full of humour and love, serves to set the tone of the production and introduce the talented cast. A highlight of Act I is the train scene in which a troupe of passenger’s expound the virtues of Vermont as a winter wonderland. The featured song, "Snow," is lively and fun to listen to, however the true value of the routine is found in the not-to-subtle, yet highly amusing efforts of the characters to force the attraction of would-be lovers Wallace and Betty Haynes.

Act II commences with a song and dance selection, "I love the Piano," that demonstrates creative use of props and inspired tap choreography. This is shortly followed by two of my favourite songs of the musical, "Falling out of Love Can be Fun," and "Sisters" (reprise). The former featuring Hosie, Lund, and Susan Anderson (portraying the meddlesome Martha Watson), not only provides a ‘girl-power’ moment for the play, but also highlights the vocal strength of this dynamic trio. The latter, performed by Victor and Talbot, is a sure hit with the audience as the playful pals pull up their trousers and perform a pseudo-drag fan dance in the Haynes sister’s stead.

The final scenes consist of a reprise of the familiar and beloved tune "White Christmas," performed by the entire cast, and audience, against a backdrop of falling snow and cheerful scenery. So the play ends as it began, full of just enough lighthearted joy and camaraderie to leave the audience feeling utterly cheerful. White Christmas: The Musical is appropriate for all ages, providing a perfect opportunity to gather the family together or take that sweetheart on a Christmas date. Be prepared to laugh, sing, and perhaps, even if you’re a hardened Vancouver skeptic, leave dreaming of a white Christmas.