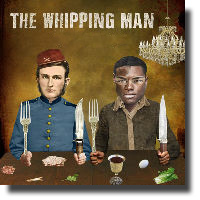 Set in Richmond, Virginia on the eve of Passover at the end of the American Civil War, Matthew Lopez’s taut drama The Whipping Man centres on a Jewish Confederate soldier returning from the battle field and two of his former slaves – now free men – who have remained at their (former) owner’s house. What were once genuine bonds between Caleb (Giovanni Mocibob), son of the property owner and indentured servants Simon (Tom Pickett) and John (Carl Kennedy) have been poisoned by a war in which they were on opposite sides.

When Caleb, a captain in Robert E. Lee’s confederate Army stumbles through the doors of his family home with a bullet still in his leg and having no wish to visit a hospital, questions over his demobilization arise. Simon, who may have been his pre-war surrogate guardian puts any resentment aside and attends to the soldier’s wound. Simon, who appears to have some knowledge in these things, recognizes that the leg is infected by gangrene and must be amputated. He reluctantly agrees to perform the amputation (with a rusty saw), but he has to get Caleb drunk on stolen whiskey first.

Fortunately, director Anthony F. Ingram spares the audience from the harrowing vision of metal meeting bone, but Giovanni Mocibob’s rendering of a man going into shock no doubt caused a few patrons to squirm in their seats.

In what seems to be the way things were, slaves were inculcated into the religious teachings of the household they grew up in. Simon and John devoutly practice Judaism faith, so they celebrate Passover with a Seder (a ceremonial dinner that commemorates the Exodus from Egypt). Initially Caleb resists the Seder, but eventually agrees to join in.

Tom Pickett delivers a powerful performance as Simon, who, rather than Mocibob’s Caleb, takes on the central role. Carl Kennedy couples humour with animosity as the younger cynical John as he cuts a droll figure in Amy McDougall’s disparate clothing. Giovanni Mocibob has the least to do, but paradoxically, the most difficult role as a defeated soldier who may not have entirely bought into the South’s cause.

Drew Facey’s deliberately dilapidated set of smashed floorboards and broken blinds and windows is depictive of a grand white mansion that has suffered from the ravages of the Civil War.

The Whipping Man is an excellent drama about a pivotal change in American history. Abolition didn’t immediately improve conditions for ex-slaves. Abolition may have brought freedom, but segregation between Blacks and Whites became even more widespread.