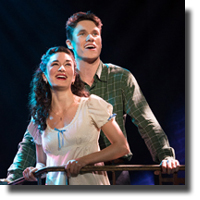 When Jerome Robbins opened his Broadway production of West Side Story, he set new benchmarks in modern choreography and musical theatre. In bringing together composer Leonard Bernstein, lyricist Stephen Sondheim and playwright Arthur Laurents as collaborators he also created a synergetic masterpiece. Hardly surprising that this modern love story based on Shakespeare’s Romeo and Juliet has been performed both as a full-scale opera and a ballet suite.

The drama of West Side Story lies less in narration, than in movement, where the cast excels in assimilating the tensions and emotions of turf war through dance form and vocal delivery. In the dazzling opening scene, we’re immediately struck by the extended dance sequence with the Polish-American Jets and the Puerto Rican Sharks skulking and strutting around James Youman's grim New York cityscape. In this dance syntax, we see alternating numerical superiority between the Jets and the Sharks that establishes the tough urban atmosphere that prevails throughout.

This Broadway Across CanadaTM touring production is grittier than many previous mountings and more evocative of the original time and place. In a quest for adjuvant realism, part of the dialogue is in the Spanish language. In addition, Maria’s second act song “I Feel Pretty” (Me Siento Mermosa) is sung with half the lyrics transposed in Spanish. Far from being a distraction, audiences should find that the device adds an extra dimension to the theatre experience.

The show's weakest scene is the surreal “Somewhere” ballet sequence. Purposely evocative of Tony and Maria's utopian dream of Jets and Sharks living in harmony, it provides an abstract counterpoint to the bleak reality.

The singing varies between competent and stellar. Jarrad Biron Green as Tony and MaryJoanna Grisso as Maria certainly occupy the primo range and are thoroughly convincing as the naive young lovers. Michelle Alves is awesome as the tempestuous Anita who illuminates in the kinetic "America" sequence.

Among the supportive roles, Benjamin Dallas Redding belies his limited stage experience with a solid triple-threat performance as gang-leader Riff. Rosalie Graziano is pleasantly surprising as Anybodies and Taylor P. Contant as Graziella displays energy and attitude in her sizzling dance moves.

The story of two lovers defying bigotry and circumstance beyond their control, and in the end failing valiantly, is a perfect recipe for spectacular musical theatre.

An Interview with Benjamin Dallas Redding

Ben plays the role of Riff in the North American Tour of Westside Story at the Queen Elizabeth Theatre in Vancouver February 4-9. I sent him an email asking him a few questions about himself and how he felt about his role.

Could you give me a brief bio of your career as an actor?

I grew up in a small town in Georgia and by fate had the BEST drama teacher. She suggested I go to a performing arts boarding school, so I auditioned for and eventually graduated from Walnut Hill School in Natick, MA. Then I went on to Elon University in North Carolina and received a BFA in Musical Theatre - great school, awesome training and an amazing four years. This is my first professional job.Joy Dewing, the casting director for WSS, came to Elon to do a masterclass with our senior class. From there she called me up to New York for subsequent auditions and a few weeks later, I got a call that I had the part!

What are your future plans?

After the show, I plan to finally make the move to New York and hit the pavement hard. I am ready to experience the city and go through that crazy transition. I’m excited for the future!

Anything else you want to add with regard to your experience throughout the tour of this show?

West Side Story has been a life changing experience. It may sound corny or hokey but everyday I get to be a part of this physical and emotional beast of a show with an amazing message and that is such a gift. WSS truly is a masterpiece; some of the greatest music ever written, iconic dancing, and one of the most famous stories in history. I am so lucky to be a part of this and to share this message every night!